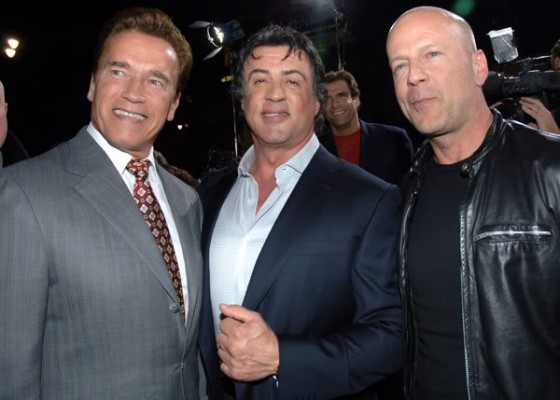 There’s been a slightly disturbing trend over the past few weeks where we’ve had new Schwarzenegger, Statham and Stallone films all bomb horribly at the box office, bringing up the question again of whether the days of the action stars are behind us and what is the current state of action movies.

Starting in the mid 80’s and going through the 90’s, action movies were all about the stars.  All you needed was Schwarzenegger’s last name and him looking bad ass with a gun on the poster and you just watched the money roll in.  Stallone, Norris, Willis, Van Damme and Seagal all became household names.

Starting in the 2000’s the action stars sort of left the limelight and it seemed like there were more jacks of all trade.  Actors like Matt Damon could star in Oscar bait movies but also kick ass in the Bourne movies as well.  The only legitimate “action stars” seemed to be Jason Statham and The Rock.  There was also a shift in the action genre from old school action featuring one man armies and renegade cops to the fantasy and superhero genres.  The biggest action movies of the last decade have been The Dark Knight trilogy and The Avengers.    Still, you don’t see Robert Downey Jr. starring in a straight up action movie that doesn’t feature him in an armor suit.

It seems like the old school action genre is slowly becoming a niche market, more and more relegated to the direct to DVD market.  That doesn’t mean there aren’t some solid entries, one of Dolph Lundgren’s best movies was the recent Command Performance and the recently released Universal Soldier: Day of Reckoning was also one of the best entries in that series.  I feel like if the likes of Schwarzenegger and Stallone have a few more flops in theaters, they may be joining Lundgren and JCVD in the home debut market. Also, the less said about Seagal, the better.

Bruce Willis is probably the only one of the old guard of action stars that is still drawing in crowds, although the quality of his movies varies wildly.

So are there any financially viable and ass kicking action stars still on the big screen?   Statham is wavering but it will probably take a few more bombs to render a final verdict.  The Rock is definitely one of the biggest and best action stars currently, thankfully making his return to ass kicking after a string of terrible family comedies.  The Rundown is easily one of the best action movies of the last decade and he delivered a much needed shot of adrenaline to the Fast & Furious series in Fast 5, making it one of the funnest and craziest action movies of 2011 and he has at least 3 huge action movies coming out this year.  Speaking of Fast & Furious, Vin Diesel was at one time one of the biggest action stars but he seems to be concentrating exclusively on his two big franchises, Fast & Furious and Riddick as of late.  One of the most welcome surprises in the action genre was the rise of Liam Neeson as an action star, kicking off in Batman Begins and The Phantom Menace but it was cemented with Taken and has only gone up from there.  Even Taken 2, which received worse reviews than The Last Stand and Bullet to Head, made a ton of money.  Mark Wahlberg is probably also one of the most reliable action stars and will be starring in the latest film in easily one of the biggest action franchises of the last few years, Transformers 4.  The most recent up and coming action star is probably Jeremy Renner, who has been set up to theoretically take over two of the biggest action franchises, Mission: Impossible and the Bourne series and also had recent success with Hansel & Gretel and was involved in one of the biggest movies of all time last year as Hawkeye in The Avengers.

There are still “action stars” but the genre has definitely shifted to more fantastical and comic book based action as opposed to the police and military action of the 80’s and 90’s.  If you want old school action it seems like it is more and more becoming a niche that is going toward more direct to DVD features.  Whatever happens in the world of action though, you can be sure that Everything Action will be following everything.

The 100 Most Outrageous Action Scenes