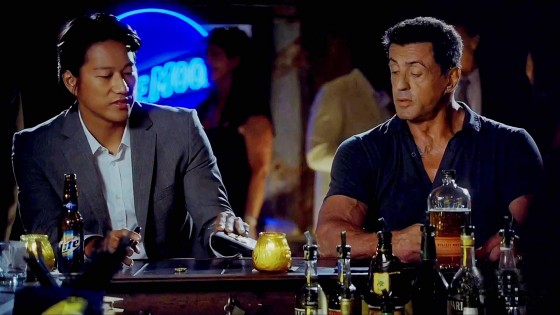 Stallone teams up with both legendary action director Walter Hill and the Fast and the Furious’ Sung Kang for his latest old school action movie, Bullet to the Head.  Does Stallone still have it without his fellow Expendables backing him up?

The movie follows Stallones as James Bonomo or Jimmy Bobo (maybe the worst action hero name ever), a hitman currently working in the Big Easy, New Orleans.  He and his partner, Louis are contracted to kill Hank Greely, who turns out to be a DC cop and whose former partner, Taylor Kwon, hops on a plane south to investigate.  A rival assassin, Keegan, kills Louis and hitman and cop team up to find out who is behind both killings.  The plot is not going to win any originality points and it doesn’t help that most of the plot consists of Kwon calling to get info and then Bonomo and Kwon going to a site, getting the next name up and the process repeats till they reach the final big bad.  The one thing that is a nice change of pace though is that it does not follow the typical “buddy” formula of the guys hating each other and then eventually growing close.  Bonomo and Kwon reluctantly decide to team up but they never fully trust each other and there is not really any friendship that springs up between them.  They do the job and that’s it.

Stallone is playing a variation of Barney Ross in Bullet to the Head with lots of one liners and proving that he can still take down the young bucks around him.  He’s a little more of an ass than Barney though and it’s a little harder to like him.  Sung Kang is fine as Kwon but he doesn’t really have that great of chemistry with Stallone and doesn’t really show off any particular action skills, like shooting or fighting.  Most of the heavy lifting in that department is left to Stallone.  The person who actually steals the movie is Jason Momoa as Keegan, an assassin who doesn’t care about money so much as the honor and prestige that killing gives him.  He is completely bad ass and he commands every scene he’s in.  Christian Slater and Adewale Akinnuoye-Agbaje round out the cast as the sleazy villains at the top of a New Orleans real estate scam and both are pretty fun.

As far as action, Bullet to the Head has a couple of cool sequences, including a fight between Stallone and one of the middle men in a sauna and, as you’ve seen from the trailers, a fantastic ax fight between Stallone and Momoa.  Director Walter Hill makes every gunshot and punch feel solid and drops the background music from pretty much every action sequence.  It actually feels more like a noir movie though, with Kwon and Bobo making their way up the gangster and scumbag ladder to find the big boss at the top and to add to that effect is lots of voice over from Stallone and less an explosion filled action movie as the trailer might make it seem.

Bullet to the Head is a solid action movie from a legendary director that may be worth checking out in theaters if you’re a huge fan of Stallone action movie but it is probably a much more solid rent when it comes to DVD/Blu Ray, maybe paired with The Last Stand.  There’s a couple of good action sequences and Stallone and Momoa are suitably bad ass but it doesn’t do anything original besides slightly skewing the “buddy” genre.