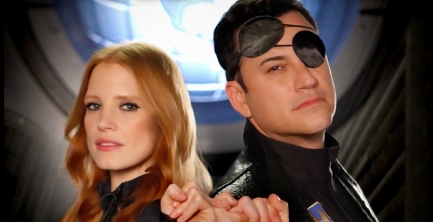 For the second year, Jimmy Kimmel unveiled a massive, star studded parody trailer on his post-Oscars show with Movie: The Movie 2V.  Last year was an attempt to create the ultimate movie by combining every conceivable genre and this year’s is more of a straightforward parody of both The Avengers and the Twilight “sexy monster” phenomenon.  Basically, an army of sexy monster, led by vampire Armie Hammer, is ravaging the globe and Jimmy and Jessica Chastain have to assemble a team to stop them, including inspiring inner city school teacher Bradley Cooper and forgetful dad Gerard Butler.  There are ton more cameos that I won’t spoil here, so check out the video below.

Kimmel also unveiled the trailer for what will sure to be the hit followup to Life of Pi with Life of Psy: