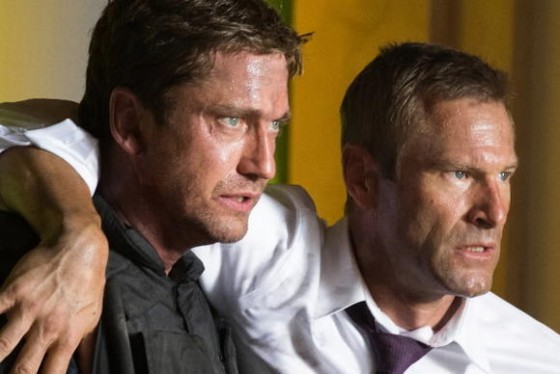 Olympus Has Fallen was the first “Die Hard in the White House” movie out of the gate this year, ahead of White House Down.  It not only sets the bar pretty high for that movie, it also puts to shame the actual Die Hard movie released this year.

Olympus Has Fallen follows Secret Service agent Mike Banning, formerly one of the President’s chief agents until a tragic accident involving the First Lady puts Banning on desk duty.  Banning is forced back into action when a North Korean terrorist attack puts the White House under the command of the vicious Kang, who wants to gain control of the classified Cerberus nuclear system.  The movie sticks extremely close to the established Die Hard formula and even seems to lift entire scenes right from the original Die Hard.  For example, there’s a scene where there is a failed attempt to take back the building with helicopters and there also a scene where a person Banning doesn’t know is working for the terrorists tries to get the jump on him by acting innocent.  It also borrows heavily from Air Force One and the latter Die Hards but it combines those parts into a fun and exciting whole.  If you think about the plot for any length of time, it does kind of fall apart (How did North Korea manage to get advanced US military hardware and a small army into the country? How did South Korea not realize one of their highest government officials was a North Korean terrorist?) and the McGuffin of Cerberus feels kind of unnecessary and only there to add the tension of a ticking time limit.

After a string of terrible dramas and romantic comedies, it’s great to see Gerard Butler back to full on ass kicking mode.  He is definitely in mold of classic action heroes, delivering plenty of one liners along with neck snaps.  Aaron Eckhart is good as always as President Ben Asher, who they establish is kind of a bad ass himself and you could easily picture an Air Force Oneesque adventure where he has to rescue everyone himself.  Morgan Freeman lends his usual gravitas as Speaker of the House Trumbull and Rick Yune plays a great, vicious villain.  Dylan McDermott also shows up as a former Secret Service agent who *spoilers* turns out to be a traitor and while McDermott plays a great smarmy douche of a villain, his motivations are pretty much non-existant and his arc really doesn’t culminate in anything that really effects the plot.

After a bunch of PG-13, shaky cam filled action movies last year and a much hyped but unsatisfying return to an R rating for the Die Hard series, it’s refreshing to have an action movie that fully embraces it’s R rating.  Olympus is not afraid to use tons of squibs and CG blood during it’s shootouts and there are multiple fights and kills using knives.  It is kind of bizarre that the most respected officials in the country are dropping f-bombs without abandon but it kind of gives the movie a goofy macho vibe that adds to the enjoyment, at least for me.  As far as action sequences go, the opening attack on the White House is spectacular and the biggest set piece of the movie.  Once Banning is inside the White House, it settles into the Die Hard rhythm of slowly taking out groups of bad guys until the final face off with the Big Bad.  Most of the action is thankfully shot so you can actually tell what is going on and feels very old school, with a dash of modern, MMA inspired moves thrown in.

Taking the crown of “best action movie of the year” so far, if you’re a fan of old school, Die Hardesque action, like we are, definitely check out Olympus Has Fallen.  It’s great to have Gerard Butler back in action mode and it features great action throughout.  It’s not going to win any Oscars for it’s plot but it’s a fun and bad ass blockbuster.