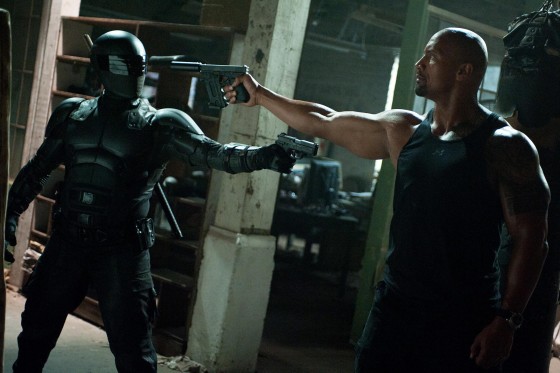 Following the success of the first Transformers movie, Hasbro/Paramount moved to get it’s other big franchise, GI Joe, on the big screen.  Rise of Cobra was a financial success but was critically and popularly hated for it’s unrelenting goofiness, terrible miscasting and very few resemblances to the beloved 80’s cartoon.  With a new director, The Rock and a very tenuous tie to the original, GI Joe: Retaliation is a much more solid action movie but is still a way from being a great one.

The movie picks up an undetermined time following the first movie.  *Spoilers for the end of Rise of Cobra*  COBRA master of disguise, Zartan, has taken over the identity of the President but, for unknown reasons, allows GI JOE to continue to operate and even destroy all remaining nanotechnology and imprison Cobra Commander and Destroy.  Duke leads a squad that now includes Roadblock, Lady Jaye, Flint and Snake Eyes.  On a mission to secure a nuclear weapons facility in Pakistan, GI Joe is betrayed, Duke and most of the Joes are killed, leaving Roadblock, Lady Jaye, Flint and Snake Eyes to figure out who set them up and get revenge.  The main weakness of the movie is definitely it’s pacing.  It has a solid setup and ending for a GI Joe movie but the middle just gets bogged down with the Joes slowly figuring things out that we a) already knew going into the movie (like Zartan being president) or b)things the movie reveals early to the audience (like COBRA’s new satellite weapons).  There are great action sequences sprinkled throughout but, for the most part, it feels like the movie is just stalling to get to it’s big finale.

Dwayne Johnson and Ray Park pretty much carry the movie through shear force of awesomeness as Roadblock and Snake Eyes.  Bruce Willis is fun as the original Joe, Joe Colton, and he has a great running joke about calling Lady Jaye “Brenda” for no reason and there’s a great bit where he reveals that every cabinet, couch and closet in his house is hiding an arsenal of weapons.  Ray Stevenson is also fantastic as COBRA Firefly and looks and acts just like his cartoon counterpart, who was COBRA’s sabotage expert.  Jonathan Pryce seems to be having a ton of fun as Zartan as the President as well and Walton Goggins also shows up as the warden of the crazy cryoprison that Cobra Commander and Destro are locked away in.  The rest of the cast is either horribly miscast or just not interesting.  Channing Tatum bought a little bit of leeway with the fantastic 21 Jump Street last year but as soon as he’s on screen in Retaliation, you’re reminded how big  a tool Duke was in the first one and how miscast Tatum was.  Thankfully, he’s mercifully killed within ten minutes and The Rock gets to take his rightful place as team leader.  RZA shows up as the ninja sensei of Storm Shadow, Jinx and Snake Eyes and is nothing but a clunky exposition reciter.  Lady Jaye and Flint are saddled with super cliche back stories of Flint having an unrequited crush on Jaye and Jaye trying to prove she is equal to the men in the military and prove herself to her military father (but who’s sole purpose seems to be sexing herself up to distract men).  There’s also Jinx, a fellow Joe ninja, but that’s all you really know about her and she has no real purpose outside of that.  One thing that is weird about the casting, and the movie as a whole, is that there’s no mention of the other Joes from the first movie like Scarlett, General Hawk, Ripcord, etc and Destro is bizarrely just abandoned by Cobra Commander in the prison.  The movie cherry picks characters and events from the original but also seems to kind of want to distance itself as much as possible from the original as well.  It’s a bizarre balance that doesn’t help it’s clunky plot and pacing.

GI Joe: Retaliation’s biggest strength is probably it’s action sequences.  They are all solid but some elevate themselves to excellent like Snake Eyes and Jinx storming the mountainside ninja fortress.  It’s a super creative, super thrilling sequence that begins with a duel between Storm Shadow and Snake Eyes and ends with Snake Eyes causing an avalanche with a flare gun with tons of ninjas on ropes running across cliff faces in the middle.  Another great sequence is Firefly’s rescue of Cobra Commander and Storm Shadow from the cryoprison, introducing his exploding firefly drones and his motorcycle that turns into multiple rockets.  Speaking of vehicles, it’s great to see more actual GI Joe vehicles in this movie.  The HISS tanks are prominently featured and there’s also very GI JOE airplanes, helicopters and hovercrafts.

GI Joe: Retaliation is a huge step up from the original Joe movie but it still has a ways to go to being a great action franchise.  The addition of The Rock helps a great deal but it’s not the drastic turn around to greatness that the Fast & Furious franchise experienced with his addition.  There are some fantastic action sequences that are great on the big screen but you don’t need to rush out and see it.  Hopefully the third time will be the charm with the GI Joe franchise as a third movie was announced earlier this week.