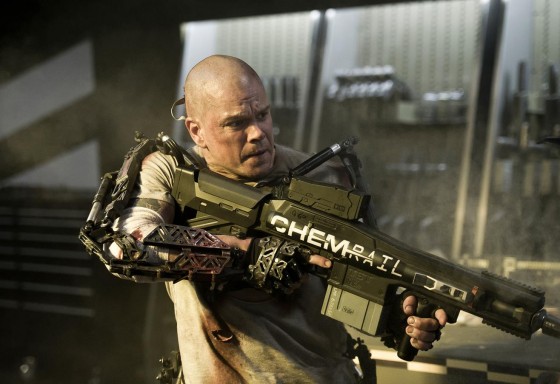 Exploding onto the scene with District 9, Neill Blomkamp returns with another uniquely styled sci-fi action movie with Elysium.  In the future of 2159, the rich have moved off Earth into the paradise of Elysium, an orbiting space station that has no crime, no pollution and no disease.  The rest of the population is forced to fight for survival in the ruins of the cities.  Matt Damon plays  a man who is determined to get to Elysium by any means necessary and agrees to get an exoskeleton attached to him in exchange for bringing down the whole system.  He then sets out on an all out assault on Elysium but the people there hire a bounty hunter played by Sharlto Copley to hunt him down.  Jodie Foster plays the manager/administrator of Elysium.  You can definitely tell this movie is from the same person who did District 9 as it has the same style of weapons, technology and vehicles but now Blomkamp actually has a blockbuster sized budget, so I can’t wait to see what he was able to do.  The movie is out on August 9th and you can check out the trailer below.