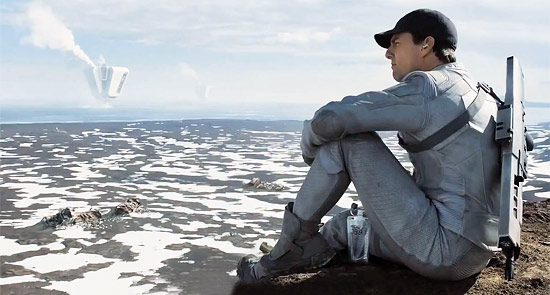 Joseph Kosinski came onto the scene two years ago, directing Tron: Legacy, which was an amazing show of special effects but was lacking in the story side of things.  With his follow up, Oblivion, the special effects are as impressive as ever but the story and pacing are still not anywhere near the level to complement them.

Tom Cruise stars as Jack Harper, a drone repairman on an Earth ravaged by a war with the alien Scavs.  The Scavs came, destroyed the moon and caused massive devastation on the planet.  Humanity was able to defeat the Scavs using nuclear weapons but the planet had to be abandoned and most of humanity fled to Saturn’s moon, Titan.  Jack, and his partner Victoria (played by Andrea Riseborough), are working to defend a series of energy converters that are drawing saltwater and converting it to fusion energy to power the new colony on Titan and also the space station, the Tet, which is orbiting Earth and where Command is stationed and who Jack and Victoria take orders from.  Things start happening that make Jack question what their mission actually is and what is actually going on.  Cruise is playing Tom Cruise as usual but he does a great job of letting you get to know Jack and what makes him tick and he has a lot of scenes where’s by himself that he is able to carry and make interesting, much like Will Smith did in the beginning of I Am Legend.  Andrea Riseborough is good as well as Victoria and does a great job of being outwardly friendly but you definitely get the sense she could turn on Jack at any moment.  Melissa Leo plays Sally, the duo’s Command officer, and it is immediately apparent that there is something very wrong with her, with her overly friendly southern accent and constant questioning of the “effectiveness” of the team.   It’s in the trailer, so it’s not really a spoiler, but Morgan Freeman eventually shows up and does his usual Morgan Freeman thing, which is great as always.

The main flaw with Oblivion has to be the story and the pacing.  I didn’t mind in the beginning when it took it’s time to establish the destroyed landscape of Earth as Jack goes about his day of repairing and finding drones, and the landscapes are absolutely gorgeous to look at, but when Morgan Freeman shows up and asks something of Jack that would seem to require some urgency and could effect the entire fate of the planet, the movie should have ramped up but instead, it slows down even more as Jack spends at least half an hour, if not 45 minutes, wandering around trying to remember the recently arrived Olga Kurylenko and hanging out at his peaceful lakeside cabin.  If you set up stakes that are as high as they are in Oblivion, you shouldn’t just immediately abandon them once they are established for a lot of brooding and longful stares.  The end of the movie also throws a number of twists at you that could derail any suspension of disbelief you’ve built up for the movie up to that point.   Bottom line, you should definitely not be going in expecting a wall to wall sci-fi action fest.

As slow and as poorly paced as the story is, the special effects almost make up for it.  Everything in Oblivion looks absolutely gorgeous, from the destroyed wreckage of major cities, to the very Tronesque home of Jack and Victoria, to Jack’s bubble ship, Kosinski is definitely establishing a style for himself that is very sleek and futuristic.  There are a couple of cool action sequences, mostly involving the drones that Jack is in charge of but eventually turn on him.  I particularly enjoyed how the movie destroyed recognizable landscapes as it was unique from other post apocalyptic movies in that with the earthquakes and tsunamis that occured from the moon being destroyed, cities were buried or entire landmasses were shifted so, for instance, only the very top observation deck of the Empire State Building is visible while the rest of New York City is buried under desert.  Also like Tron, Kosinski teamed up with a unique partner for the movie’s score, in this case, the group M83.  It’s nowhere close to the greatness of the Daft Punk score from Tron: Legacy but it does a great job of punctuating key moments.

Oblivion is a gorgeous looking movie with a couple of great action sequences but the visuals can only distract you for so long until the plot bogs down the movie.  It’s worth seeing in theaters just for the visuals but you have to adjust your expectations accordingly and be ready to be patient when the movie starts dragging.  If Kosinski can ever get the story to the level of his special effects, the movie that results will be an amazing accomplishment.