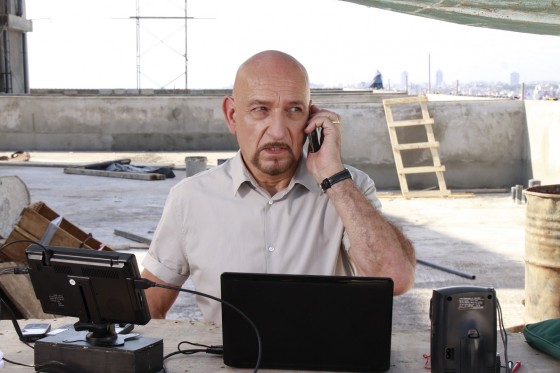 Ben Kingsley will be terrorizing Tony Stark as the villainous Mandarin this weekend but in a few weeks he’ll be involved in some more realistic terror in the action/thriller, A Common Man.  Here’s how Anchor Bay describes the movie:

Our newspapers are filled with stories about them. The airwaves announce their actions on a daily basis. But who exactly is what we call a “terrorist?” While they share the same methods, do all terrorists have the same goal?

Anchor Bay Films announces the May 21st Blu-ray™ and DVD release of Myriad Pictures’ A COMMON MAN. Oscar®-winner Ben Kingsley (GANDHI, the upcoming IRON MAN 3) stars as a seemingly average citizen who plants five powerful bombs in different locations around a major international city and threatens to detonate them unless his sole unconditional demand is met: The simultaneous release of four of the most deadly international terrorists from government prisons. In an urban landscape already gripped by fear, what could be the real motive behind a cunning madman’s ultimate plan?

Ben Cross (STAR TREK, CHARIOTS OF FIRE) co-stars in the film, which has been named a finalist at this year’s New York Festival. An explosive thriller about duty, justice and the never-ending cycle of terrorist violence – all of which begins and ends with A COMMON MAN.

A COMMON MAN, screenplay written and directed by Chandrum Rutnam, from the story by Neeraj Pandy, was produced by B.S. Radha Krishnan, Manohan Nanyakkara, and Rutnam of Asia Digital Entertainment. Paul Mason and Jonathan Sheinberg served as executive producers.

It looks like it could be a good cat/mouse thriller and there’s sure to be some sort of twist about why Kingsley’s character is doing what he’s doing, perhaps having to do with his Michael Caineesque accent.  We’ll be giving away two copies of the movie the week before it comes out on May 21st, so stay tuned to the site for details on that contest and you can check out the trailer in the meantime.