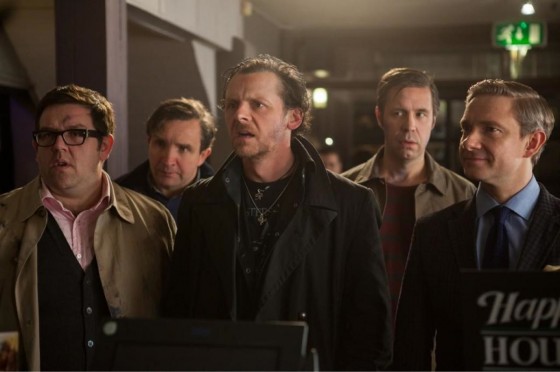 It’s been six years since Hot Fuzz but the Cornetto trilogy will finally be complete as Edgar Wright, Simon Pegg and Nick Frost rejoin for The World’s End.  After zombies and action movies, alien invasion seems to be the main genre being parodied/lovingly recreated.  Pegg stars as Gary King, who manages to convince his four childhood friends to join him in trying to finish a challenge they never completed as kids: drinking a pint from each of the 12 pubs in their hometown ending at The World’s End. However, that challenge gets put on hold when they realize the town may have been taken over by body snatching extraterrestrials. Paddy Considine, Eddie Marsan and Martin Freeman round out the quintet of friends. I have no doubt this movie will be hilarious and it’s fun to see Pegg and Frost reverse roles with Pegg being the crazier one and Frost being extremely straight laced.  The movie is out on August 23rd and you can check out the trailer below.

TinTin: The Secret of the Unicorn Full Trailer

The Adventures of TinTin Trailer