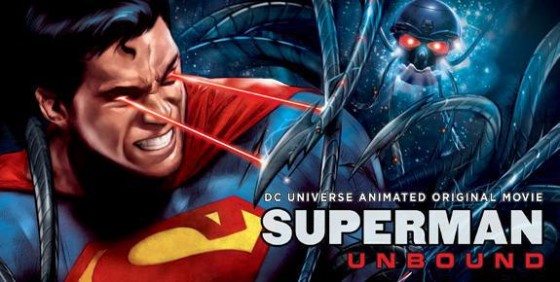 The latest movie from DC Animation adapts the Geoff Johns/Gary Frank story Superman: Brainiac and it’s easily the best of the Superman animated movies and definitely in the top 5 of all the DC animated movies.

The story picks up with a mysterious object crash landing on Earth and Superman finding that it’s a hostile alien robot.  He manages to defeat it but his cousin Kara aka Supergirl recognizes it as one of Brainiac’s drones and tells Superman about how the capital city of Krypton, Kandor, was taken by Brainiac, who is a genetically engineered creature who wants to gain all the universe’s knowledge and is destroying planets to ensure nothing else to be learned from them after draining them.  Superman heads off to find Brainiac and stop him while Supergirl takes care of things on Earth.

The last few DC Animated movies, Batman: Year One and The Dark Knight Returns have been incredible but if they had one flaw, it’s that the voice acting was not quite up to the level of everything else in the movies but thankfully, the voice acting for Unbound is pretty great across the board.  Matt Bomer of White Collar voices Superman and does a great job of  bringing a lot of wit and charm to both identities and is able to turn on the seriousness when necessary.  John Noble of Fringe is the absolute perfect voice for the cold, clinical Brainiac.  Stana Katic and Molly Quinn of Castle voice Lois Lane and Supergirl respectively and Katic especially does a great job of capturing Lois’ no BS attitude.

The animation is top notch as usual and there are tons of excellent action sequences.  The opening features Supergirl stopping a group of criminals who have kidnapped Lois and are escaping in helicopters.  There’s two awesome sequences where Superman has to stop entire armies of Brainiac clones and the fights between Brianiac and Supes are excellent as well.  The movie also continues the trend of the DC animated movies upping the maturity level, at least in terms of violence.  The opening credits features a pretty disturbing “birth” of Brainiac that features his organic eyes being ripped out and replaced with cyber eyes and getting his body completely reconfigured and there are multiple scenes of ordinary citizens getting spikes launched into their heads by Brainiac drones a la Scorpion from Mortal Kombat and getting their brains drained and then exploded and there is blood.  I think we all appreciate that DC seems to be wanting to push things with each animated movie and that they recognize that most of the fans of the animated movies are older and are starting to cater to that.

There’s not too much in the way of negatives in Superman: Unbound.  The only thing that was kind of disappointing was the way Brainiac is defeated.  I won’t spoil it but for such an awesome and powerful villain, he has a pretty glaring design flaw.

Overall, Superman: Unbound is another excellent entry in the DC Animated universe.  Marvel may be eating DC’s lunch when it comes to live action movies but DC owns the animated movie space.  It’s probably the best of the Superman animated movies and definitely one of the best overall DC animated movies.  If you’ve been a fan of the DC movies, this one is a must watch.