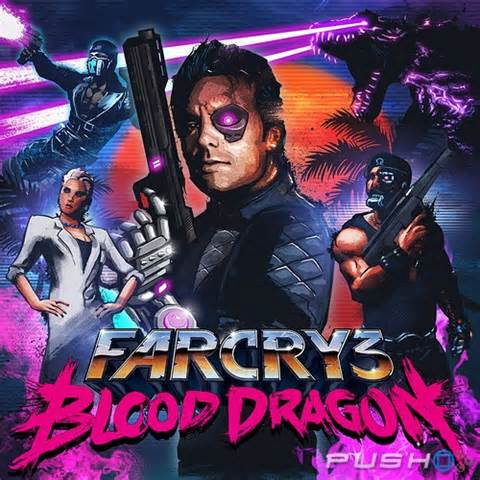 Far Cry 3 was considered one of the best games of last year but they may have turned it into one of the best games ever with the recent release of Far Cry 3: Blood Dragon.  For the mere price of $15, you can have the most awesome 80’s action experience ever pumped into your eye holes as you guide Mark IV Cyber Commando Rex Power Colt on  mission to stop the evil renegade General Sloan.  If you’re on the fence about whether or not you should play the game, here are five reasons (in no particular order) you should stop everything and get it immediately for your system of choice.

One of the most beloved 80’s action heroes, Michael Biehn, provides the voice for Rex in Blood Dragon and it’s instantly clear that this is something he actually cares about, unlike his barely alive appearance in Aliens: Colonial Marines.  The fact that you are running around as a half cyborg Kyle Reese/Lt. Hicks should be enough for most of you to get this game.

The score for Blood Dragon, provided by Australian electronic group Power Glove, is a masterpiece of 80’s synth, evoking the scores for Terminator and Robocop.  The game does an excellent job of also making it more ambient until you get into some action and then it just kicks in full force, make everything at least 80% more rad.  If that wasn’t enough, there are also a couple of choice licensed tracks including “Hold on to the Vision” from No Retreat, No Surrender and “Friends” from Miami Connection.

The story of Blood Dragon is ridiculous in the best way possible.  Basically what it entails is that the renegade General Sloan has taken over this small island and is using the blood of the native Blood Dragons to create some sort of bioweapon to launch in warheads at all the major cities of the Earth.  The story is also set in the far off future of 2007 where Vietnam War 2 happened and “the apocalypse had an apocalypse”.  The game parodies all the cliches of the 80’s action genre, from your best friend/partner getting killed to a training montage, a sax infused sex scene and the final over the top confrontation with the villain.  It’s all told through cut-scenes that feel like they are from a SNES game.

Blood Dragon is full to the brim with references and homages to classic and not so classic 80’s action and sci fi movies.  Terminator and Robocop seem to be the most prevalent but the glorious Predator handshake above is recreated within the first five minutes of the game and I’m sure Rex cribs one liners from at least half a dozen other movies.  Most of your weapons are direct references as well.  Your pistol, the AJM 9, is the pistol from Robocop and your shotgun is called the Galleria 1991, in reference to Terminator 2 and the gun Arnold uses to rescue young John Connor from the mall and during the motorcycle chase.  If you’re old school FPS fan, there’s also a section of the game that will bring you back to playing games like Serious Sam or Painkiller. 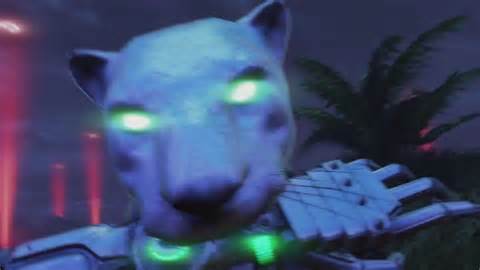 Whether because of the apocalypse’s apocalypse, the after effects of Vietnam War 2 or whatever weird testing Sloan is doing, the island of Blood Dragon is infested by various mutant and cyber animals, like sharks, panthers and tortoises.  All the villains you’ll fight are cyborgs as well and sound like they came out of an early 80’s arcade game, like Bezerk.  Since Rex is half cyborg as well, he’s able to jump from any height and can implement a wide range of increasingly ridiculous ways to repair/heal himself, including pulling out a welder and putting his wrist back in place.  I don’t think the titular Blood Dragons are cyber but they do shoot lasers, so that is completely awesome by itself.

Top 5 Most Overused Songs in Trailers