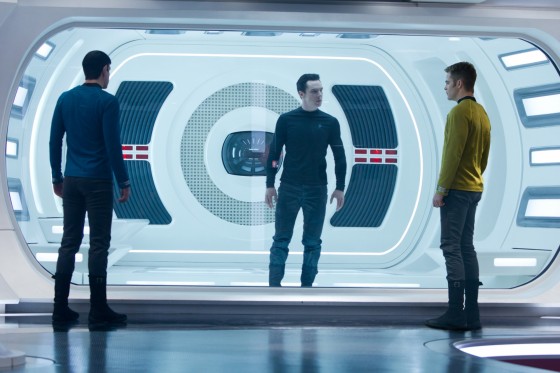 With 2009’s Star Trek, JJ Abrams injected the legendary franchise with a fresh new cast and direction and tons of fantastic action.  With Into Darkness, all of that is still true, with the action especially amped even higher.

The movie picks up with the Enterprise crew rescuing an emerging civilization from a volcano where Kirk breaks the Prime Directive to rescue Spock.  Thanks to Spock’s truthful report to Starfleet, Kirk is demoted to first officer back under Admiral Pike and Spock is reassigned to another ship.  All that is proven moot though as the terrorist John Harrison first attacks a London Starfleet archive and then attacks the gathered heads of Starfleet in San Fransisco.  Kirk is reinstated as captain of the Enterprise and tasked by Admiral Marcus to hunt Harrison down and kill him with an arsenal of new long range proton torpedoes.  There’s a twist involving Harrison that ties back to one of the classic Trek films and when it’s revealed, the movie switches into a remake of it and it may rely a little to heavily on believing everyone has seen that particular film.  The climax resolves itself  perhaps a little to quickly, which may leave anyone who hasn’t seen the other film scratching their heads.

The one flaw that you could level against the first Star Trek was that the villain was kind of weak and not memorable.  That is definitely not the case with Benedict Cumberbatch as John Harrison, who commands respect and instills fear from the second he appears on screen and is more than a match for the combined skills of Kirk and Spock.  If you know JJ Abrams, you know the secrecy behind Cumberbatch’s character and I mentioned above there’s a twist, that I won’t spoil.  I’ll just say that he’s a classic Trek villain and lives up to the original portrayal while providing a more calculating and subtle take on it.  He’s very reminiscent of Tom Hiddleston’s Loki (and actually finds himself in a similar position in the middle of the film).  Chris Pine and Zachary Quinto as Kirk and Spock are great as well, building up even more back and forth rapport.  Kirk is even more reckless than usual as he’s on a revenge mission and the constant truthfulness and logic of Spock just drives him even crazier.  Karl Urban as Bones and Simon Pegg as Scotty are the two other crew members who contribute the most to the movie, with Scotty proving pivotal toward the end and Bones being delightfully pessimistic.  It’s definitely shows Urban’s range as he can play one of the most bad ass characters ever in Dredd and turn around and play the slightly paranoid Bones, who hates space even though he’s a spaceship doctor.  A couple of new additions to the cast are Peter Weller as Admiral Marcus, who *spoiler* becomes the main antagonist when it’s clear his intentions are not in line with the Enterprise crew and Alice Eve as his daughter, Dr. Carol Marcus, who conveniently is a weapons expert whose expertise comes in handy for one scene but is pretty much just a pretty face for the rest of the movie.  Uhura, Chekov and Sulu are not given too much to do but each of them at least gets one scene that puts them in the spotlight.

One of the major points of contention for old school Star Trek fans is that they’ve turned into the series into an blockbuster action franchise, when it was more about diplomacy and science.  I love a good Picard philosophical debate as much as the next person but you can’t deny that the action on display in the Abrams’ Star Trek movies in not spectacular.  From the opening where Spock is inside a volcano and Kirk and Bones are running from natives a la Raiders of the Lost Ark to an amazing battle on the Klingon homeworld highlighting Harrison’s combat prowess to Kirk launching himself through space to get to another ship, everything is incredible to look at and expertly staged.  As great as the action in this movie is though, there’s nothing that quite reaches the level of the “Fire Everything!” sequence from the first film, which makes me want to stand up and cheer each time the Enterprises blasts back into the scene with every weapon blazing.     There are a couple of great inside jokes to old Trek as well, including Kirk telling Bones to “stop talking in metaphors”, in a reference to the Enterprise crew’s habit of distilling complicated technical solutions into easy to understand metaphors.

If you liked 2009’s Star Trek,  you will most likely love Into Darkness.  With the addition of a great villain, even more exciting action and a more comfortable Enterprise crew, it’s one of the best blockbusters of the summer so far (which only includes two, I know).  Definitely worth seeing it in theaters (I’ve heard the 3d is excellent as well but I saw it in 2d)