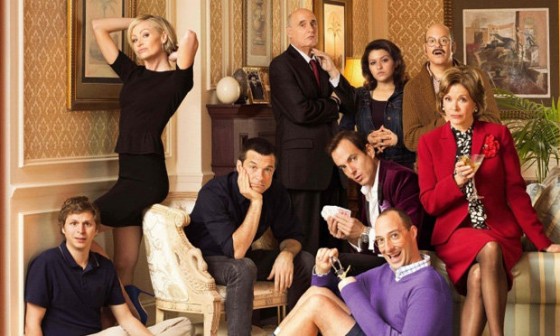 Something we thought we would never see happened over the weekend as the long wished for fourth season of Arrested Development arrived on Netflix.  The first three seasons cemented the show as one of the greatest comedies of all time and expectations were into the stratosphere for the new episodes.  Perhaps taking a cue from their resident analrapist, Tobias Funke, they decided to “let the grand experiment begin!” and did something completely different, insanely complicated and incredibly hilarious.

Most likely due to scheduling conflicts, Mitch Hurwitz and his team wasn’t able to get the entire cast together at the same time and, in order to work around it, each of the new episodes focuses on a single character with Michael, Tobias, Gob, Lindsay, George Michael and George Sr getting two episodes each and Lucille, Maeby and Buster getting one.  There’s actually a great running joke where there will be empty chairs at key events in the season with the characters photo on them.  Each episode follows the characters from almost immediately after “Development Arrested”, the third season finale, to five years later at a disastrous “Cinco de Quatro” party (A fake holiday Lucille created out of her hate for Cinco de Mayo). There are some great, ridiculous things happening to the Bluths, including George Michael going to college, Michael entering the world of Hollywood with Ron Howard, Tobias meeting a meth addicted actress and Lindsay going to India.   The focus is a dual edged sword because if it’s a character you love, like Tobias or Gob, the episodes are usually non stop laughs but a character like Lindsay, for instance, tends to be less laugh filled.  A bad episode of Arrested Development is still better than pretty much anything on TV currently though.  I would probably rank the Tobias episodes as my favorite with the Gob and Maeby episodes a close second and the second Michael episode and the George Michael episodes in third.

Season 4 ups the ante in terms of complexity and narrative structure.  The original 3 seasons rewarded repeat viewing and hyper observation to catch all the background jokes and double meanings but Season 4 requires repeat viewing just to understand how all the events unfold.  It’s almost a Christopher Nolan level of complexity as things are happening concurrently for all the characters and there will be events that seemingly make no sense that you learn later on in a different character’s episode  is a punchline for a joke you didn’t hear until that moment.  The characters constantly weave in and out of each other’s stories and, like I mentioned before, all culminates at the Cinco de Quatro party.  For casual fans of Arrested Development, it might be slightly overwhelming but there is nothing quite like a joke or event that made no sense in the beginning of the season snap into focus in one of the later episodes and become the funniest joke of the episode.

Along with pushing the narrative into new directions, Season 4 of AD also pushes the comedy as well.  It could have just coasted along with all the running jokes from the previous 3 seasons but the show chooses to create almost as many new running jokes, most of them fantastic.  At one point, Gob joins the entourage of teen star, Mark Cherry, and eventually gets on their nerves, so they write a diss song about him that Gob is oblivious to and, for the rest of the season, the song is referenced in ringtones or sung or talked about by characters.  There’s also a running joke involving an ostrich, Haliburton Teen and, one of my favorites, putting a fake watermark for “Showstealer: Pro Version” over any footage from the previous seasons.  Most of the old jokes get dropped at least once, so don’t worry old school fans.  There’s also an absolute cavalcade of new and old guest stars, most great, some just OK.  The Veals, Jean Parmigian, Tony Wonder, Barry Zuckercorn, Bob Loblaw, Lucille Austero, Sally Sitwell, Steve Holt and more all come back and there’s some great new characters, like Terry Crews as sleazy politician, Herbert Love, George Michael’s roommate P-Hound and John Slattery as Oscar’s disgraced, drugged out doctor friend, Dr. Norman.  Two guest stars I’m still not sure about are Kristin Wiig and Seth Rogen as young Lucille and George Sr.  They are great, especially Wiig, but it seems like Jessica Walter and Jeffrey Tambor could have done those scenes just as well, if not better.  What I love about Arrested Development is that it doesn’t give two shits if it’s accessible to new viewers or not.  It’s almost a constant stream of in jokes and references with no explanations that are for only the most dedicated of fans.  I appreciate the fact that the new episodes are possibly inaccessible for anyone not totally dedicated to the Bluths and if you are thinking about watching them because you heard about the show, stop and watch all three original seasons first or your brain might melt under the comedy onslaught.

If you’re like me, any chance to just spend more time with the Bluths would have been enough but the new season is a complex, super interesting and hilarious experiment that pushes the characters and the narrative into never before seen directions.  All the episodes are good, with your preference for character pushing them into great, and if you haven’t already devoured them in one sitting, they are definitely a must watch for Arrested Development fans.

The Bluths are Back for Season 5 of Arrested Development (Trailer)