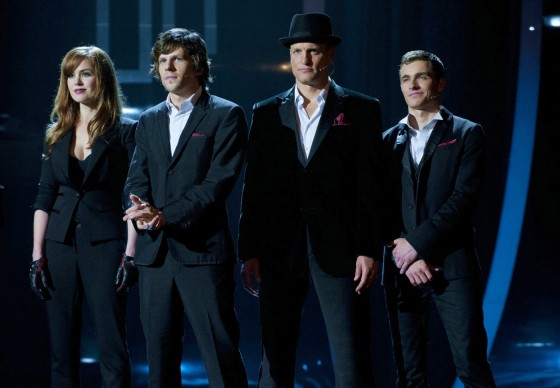 You would have though that there would have been more movies that combined heists with magicians before Now You See Me, since magicians are all about distraction, misdirection and sleight of hand, all key skills for pulling elaborate heists.  In Now You See Me, the combo results in a wonderfully ridiculous movie that is more fun than good.

The movie stars Jesse Eisenberg, Woody Harrelson, Dave Franco and Isla Fisher as a group of magicians who call themselves “The Four Horsemen”, who seemingly pull off robberies during their shows and give the money to the audience.  This draws the attention of both FBI agent Mark Ruffalo and magic debunker, Morgan Freeman.  Michael Caine is the man who backs the Four Horsemen, a rich insurance magnate.  Each of the Horsemen is set up to have a specific skill, Franco is a pickpocket, Harrelson is a hypnotist, Fisher is an escape artist and Eisenberg is a showy close up magician but it’s a little disappointing that all but Harrelson keeps up their specialty, while the rest just turn into magical jack of all trades.  The main quartet is really fun together, with Eisenberg and Harrelson bringing back some of the great back and forth from Zombieland, although Eisenberg is channeling a more of the cocky asshole persona he brought to The Social Network.  Ruffalo is great as usual as a completely exasperated, asshole of an FBI agent who constantly is one step behind the Horsemen and I also love Freeman, who comes in after each heist and just rubs it in the face of the FBI with how the Horsemen did it.

As you would expect, there is a ton of magic tricks (or illusions if you prefer) and the movie sets up almost immediately that pretty much everything in the movie will not be what it seems.  The onstage performances of the Horsemen are fun to watch and the sets are pretty great and there some good, Ocean’s Eleven style cons and constructions going on.  One of the highlights, and something the movie should have did a lot more of, is a fight scene between Dave Franco and Mark Ruffalo where Franco uses pretty much every trick in his arsenal to evade Ruffalo, including throwing cards, disappearing into curtains, turning paper into fireballs, etc.  It’s a great, creative use of magic that isn’t really replicated anywhere else in the movie.  There’s a pretty standard foot chase and car chase as well (although there’s a twist revealed about the car chase later).  Speaking of twists, this movie has maybe one of the most ludicrous twist endings in recent memory and I feel pretty safe saying that the movie does not set it up in any way that would make sense on a second viewing.  There are a ton of red herrings about who is behind the Horsemen but when it’s finally revealed, it is completely out of nowhere.  The ending also kind of just fizzles out when I was hoping it would have kind of an insane ending that would cap off the goofiness of the movie (They are constantly setting up that the Horsemen may be recruited by an ancient society called The Eye that deals in real magic).

Now You See Me is a light, fun movie that breezes past in seemingly no time at all.  There’s a bunch of fun magic and a great cast but it’s definitely not going to win any Oscars or compete with the big blockbusters currently showing.  It may be worth checking out during a matinee but definitely would be a solid rental when it comes out on DVD/Blu Ray.