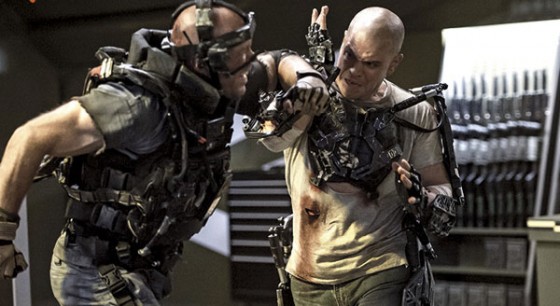 One of the most anticipated movies of the summer, at least for sci fi nerds like me, is the latest from Neill Blomkamp, director of District 9.  Elysium finds Matt Damon as a blue collar factor worker in the year 2154, where Earth is over crowded and over polluted, but only the poor still live on the planet.  The rich have moved off planet to the space station Elysium, which is a paradise of peace and health.  An accident at the factory causes Damon’s character to have five days left to live, but the technology on Elysium could save him, so he agrees to have an exo skeleton fused to him and heads off to raid the space station.  The director of Elysium, Jodie Foster, can’t have this so she activates the cyborg bounty hunter, The Kruger, played by Sharlto Copley.  It looks fantastic, with tons of action and the same gritty, dirty future feel that Blomkamp brought to District 9.  It also looks like it’s going to have a good bit of Paul Verhoeven style satire, there’s a few great scenes in this trailer where Damon has some interactions with a couple of the robotic authority figures that do not go so great.  The movie is out on August 9th and you can check out the new trailer below.

Neill Blomkamp Gets Back to His Roots with OATS Vol. 1 Shorts (Trailer)