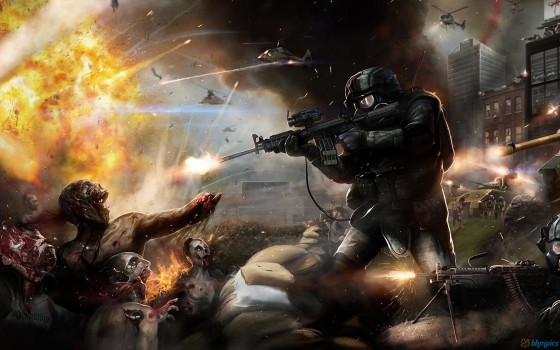 World War Z is out in theaters this week and, from everything we’ve seen, it looks like it will only have a passing resemblance to the amazing book it’s based on.  It would probably be impossible to film all the characters and events from the book without having some sort of miniseries or TV show but here are 10 of the best things from the book that we probably won’t see on screen, but should (Spoilers for the book).  In no particular order:

10. The Battle of Yonkers

I’m guessing that we may actually see some form of this military disaster in the movie but probably not to the scale of the battle described in the book.  The US military decides to put on a big show of force just outside of NYC and, while they choose a strategically located battlefield, the arrogance and lack of knowledge about the zombies leads to the infantry being overrun and the beginning of the massive retreat by the US forces.  All of the high tech military technology used against the zombies is useless as most of it doesn’t result in the destruction of the brain.

9. The Disappearance of North Korea and other countries struggles

World War Z, the movie, looks like it’s going to be very focused on the US struggles against the zombie hordes.  Max Brooks makes it a point in the books to check in with almost every major country on Earth and examine how they survived the zombie outbreak.  Iran and Pakistan have a short nuclear war that decimates both countries and leads to “nuclear autumn” where so much ash from the bombs, and just all the fires raging out of control on the planet, that the temperature drops and the sky is almost permanently overcast.  One of the most bizarre global events is pretty much the complete disappearance of North Korea.  South Korea notices that the border guards at the DMZ vanish and then all communication ceases.  The theory is that the people were all forced into a massive series of underground tunnels and bunker and they all either succumbed to the infection or their leader (who would have been Kim Jong Il at the time the book was written) is keeping them down there indefinitely as the ultimate way to cut out the rest of the world.

We may see some form of this possibly in the movie as well, but most likely in some watered down version.  Coming out of South Africa, a strategic analyst named Paul Redecker comes up with the highly controversial plan that leads to most of the major countries being saved but at a horrible cost.  Redecker proposes that countries send most of their citizens to a defensible position with military protection, but they also need to send a large portion of the citizens and military to a less secure position, to act as bait and draw the majority of the zombies while the majority regroups and rebuilds.  The worst part is that Redecker calls for the people who will be bait to keep being supplied as long as possible, giving them the false hope that they may eventually be rescued.

Max Brooks investigates every possible aspect of the military’s operations against the zombies and one of the parts who would never think of is the use of dogs.  A special K-9 corps is formed but the dogs used are not your normal attack dogs, because zombie flesh is toxic, but dachshunds and other smaller dogs.  More typical military and guard dogs are used to guard their smaller partners against feral animals as well as zombies.  Their main use is scouting and search and rescue.

Deserving of an entire movie itself, the story of Chinese submarine commander, Captain Chen, and his crew is full of danger, not just from zombies, but from the collapsing Chinese government as well.  Chen becomes fed up with the out of touch Chinese Politburo sending wave after wave of untrained soldiers against the zombie hordes and tells his crew to gather whatever family they can and they abandon the country in their nuclear sub.  They run into a completely congested ocean full of ships and boats, most overrun with zombies.  They finally end up at a South Pacific island sanctuary but are chased away by another Chinese attack sub.  They survive the encounter and flee to the Arctic ice.  Another sub approaches but it’s Captain Chen’s son, who informs him a civil war has been raging in China and they have to power to stop the insane old regime.  Chen launches one of the nukes and kills the men of the Chinese government and China becomes a democracy, which Chen does not live to see.

5. Quislings, Ferals and other dangers

Zombies turn out to be the least of the US army’s concerns in their slow take back of the country.  Insane humans called Quislings are everywhere, people who have snapped and believe themselves to be zombies, even though they are still alive.  There are also feral dogs and cats who have become bloodthirsty killing machines and rogue militias and survivors who do not want to give out the territory they’ve carved out for themselves.  A chart of the dangers comes out that lists the actual zombies as the least dangerous threat.

Arguably the coolest characters that the fictional UN official Max Brooks interviews is Kondo Tatsumi and his blind sensei, Tomonaga Ijiro.  Tatsumi was a computer nerd who spent most of the early days hacking into the Japanese government databases, finding attack plans and evacuation routes.  His parents mysteriously disappear and Kondo only leaves when zombies start pounding on his door.  He makes his way down the side of his apartment building using bed sheets and finds a WWII sword in one of the last apartments he hides in.  He eventually reaches the ground and makes his way into the forest where Tomonaga has been hiding, a blind gardener who decides it is he and Kondo’s mission to rid their country of the zombie plague.  Eventually the two survive the war and begin teaching their non firearm combat to a new group of recruits.

3. Battle in the Paris catacombs

As if the miles of catacombs under Paris weren’t scary enough, the tunnels became infested with undead during World War Z and some of the most dangerous and horrifying fighting took place in them.  The buildup of gas from the dead and natural sources made firearms useless and the soldiers had to fight their way through in almost pitch blackness.  Many of the tunnels flooded and the divers who were sent in had a 1 in 20 survival rating.

Speaking of divers, the zombies ability to move unhindered at even the deepest of ocean depths made the use of a special military unit that fought the undead underwater in exo suits.  Their main function was first to defend oil rigs that were being prepared to resume the flow of oil and then were engaged in cleaning and clearing harbors, the worst being Boston.  Even after almost a decade since the end of the war, there are still hordes of zombies making their way across the ocean floor.

1. The reforming of Russia

Russia, as with most wars they fought in the past, suffered a horrendous number of losses during World War Z and almost had a rebellion among their troops until a decimation, where the soliders are placed in groups of 10 and 1 is designated to be killed by the other 9 or else they all will be killed, restored their loyalty.  In order to cut off the infection, thousands of people were gassed trying to flee the cities, the infected returning as zombies and destroyed.  The country underwent a massive resurgence in religious faith after priests in the military started mercy killing infected soldiers and the country was reformed and renamed The Holy Empire of Russia.