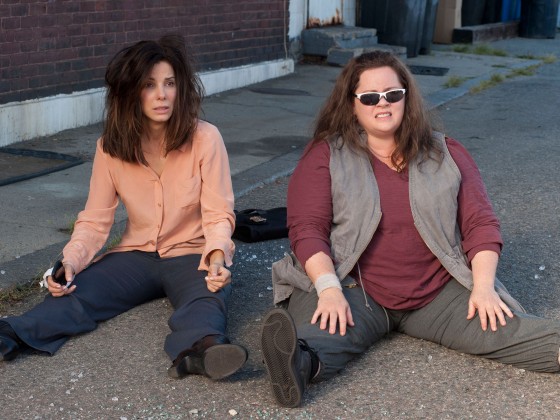 The “buddy cop” movie cliche has been around for basically as long as there’s been movies. It’s been done, done well (“Lethal Weapon”), done with tongue firmly in cheek (“The Other Guys”) and done awful (“The Man”).

The most disappointing thing to “The Heat”, director Paul Feig’s follow-up to the smash comedy “Bridesmaids”, is that it does nothing with this cliche. Instead a fairly uninteresting plot is punched up by the improv workings of Melissa McCarthy and Sandra Bullock. For the most part, it rescues the movie from the dregs.

Bullock plays FBI Special Agent Sarah Ashburn. Based out of DC, she’s at the top of her league with cracking cases and putting the bad guys away. When a promotion is possible, she’s initially denied despite her best efforts, because nobody on the force can stand her. She’s sent to Boston to work on a case involving a sadistic drug lord. Here she teams up with the rough-around-the-edges Beantown detective Shannon Mullins. And yes — Bullock is the straight man to McCarthy’s comedic toughie. Think “Hot Fuzz”.

The two set out on a typical whodunit case in order to track down the drug lord. Ashburn’s methodical ways are no match for Mullins’ more “hands on” tactics. Hijinks ensue.

Looking back on “The Heat”, it seems like only two pages of actual script were written, leaving room for Bullock and McCarthy to riff on each other. McCarthy is a natural considering her background but Bullock is the real surprise. The chemistry between her and McCarthy is undeniable and there are several funny sequences between the two that turn into gut-busting insult slinging.

These improv battles remain the most interesting thing about “The Heat”. As a buddy cop film, it doesn’t try to reinvent the wheel or trying anything new and perhaps it shouldn’t. But instead we are left with a lackluster script buoyed by the comedic talents of the two co-stars. If you’re expecting one of the funniest movies of the summer, reset your expectations. But if you liked “Bridesmaids”, this should keep you satisfied.