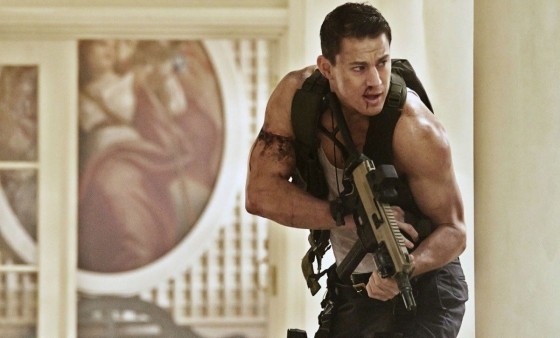 The bar for “Die Hard in the White House” movies was set incredibly high by Olympus has Fallen and not only does White House Down not clear the bar, it trips and face plants on the way to trying to clear the bar.

White House Down finds Channing Tatum as capitol police officer John Cale.  Cale is currently protecting the Speaker of the House, played by Richard Jenkins, but hopes to join the President’s secret service detail to impress his daughter, Emily.  After a pretty disastrous interview with Secret Service agent Carol Finnerty (Maggie Gyllenhaal), John and Emily are taking a tour of the White House when a coordinated attack on the Capitol and the White House separates them and forces John to spring into action to save both his daughter and the President (Jamie Foxx) himself.  While Olympus Has Fallen hewed pretty close to the original Die Hard, White House Down actually seems to be trying more to emulate The Rock, with it’s domestic terrorist threat, iconic location and the motivations of the villains.  It doesn’t come close to the greatness of either of those action classics as it takes forever to get started and it mechanically hits all the beats you would expect for the genre.  Compared to the brisk pace of Olmypus Has Fallen, White House Down feels bloated and slow.  Jamie Foxx and Channing Tatum have decent chemistry but it’s not enough to counteract the loagy pace of the movie.  They are obviously trying to go for a Lethal Weapon/buddy cop dynamic but none of the one liners or back and forth is snappy enough.  I don’t expect Shane Black level dialogue but what’s there is chuckle worthy at best.  *mild spoiler alert*  Not really mentioned in any of the advertising is the fact that James Woods is the main villain and he’s pretty great as a snarling, unhinged traitor.  Jason Clarke fills in the Karl role from the original Die Hard as the second in command who becomes obsessed with getting revenge for the death of one of his men.  Lance Reddick of Fringe also shows up as the main military commander in the command center.

Probably the most shockingly awful thing about White House Down is the fact that even though it has double the budget of Olympus Has Fallen, it looks incredibly cheap.  For the most part, the CG effects are awful and it is glaringly obvious when people are on sets or in front of green screens.  The one thing I was hoping was that with Roland Emmerich behind the camera, the action sequences would at least be over the top but for the most part, they are incredibly generic.  There are few exceptions, like a fun chase on the south lawn between the Presidental motorcade vehicles, and the one thing that White House Down does have over Olympus Has Fallen is that it makes slightly better use of the location, as most of the action sequences take place in iconic locations like the Lincoln bedroom, the press conference area, the aforementioned South Lawn and the Oval Office.  Weirdly enough, both White House Down and Olympus Has Fallen both rip off the iconic helicopter attack from Die Hard in almost the exact same way.  I think it’s a testament to how great practical effects still are as everything in Olympus Has Fallen has weight behind it.  I think it definitely helped that Olympus Has Fallen was a hard R while White House Down was an incredibly toothless PG-13.  I did appreciate that they didn’t resort to the shaky, cutting away technique we’ve been seeing recently, it’s just that no one has any blood in this universe.

The other main issue with the movie is that, like most Roland Emmerich movies, it suffers from the worst kind of cheeseniess, in that it’s eye roll inducing as opposed to laugh inducing.  The peripheral characters are all ridiculous, like a White House tour guide who is constantly trying to get the terrorists from breaking priceless artifacts to a weaselly vice president but the worst has to be Emily Cale.  From the first minute of the movie, you almost instantly hate her, as she wakes up to a news alert on her phone and watches a press conference from President Sawyer and then is revealed to be a politics obsessed YouTuber know it all.  Every new aspect of her personality makes her more and more annoying and the culmination during the climax is one of the stupidest things I have seen this year and an insult to one of the most bad ass scenes in action movie history.  The scene following it is somehow even worse, as the real villain behind everything is taken down like a Scooby Doo villain and I’m shocked he didn’t give some variation of “I would have gotten away with it to, if it hadn’t been for you meddling kids!”.

It was bizarre that two movies with the same, very specific scenario, would come out within a few months of each other but Olympus Has Fallen is the clearly better film.  It’s better paced, more action packed and does a much better job of hewing to the Die Hard formula.  White House Down is a bloated, generic action movie that has a few fun aspects but their buried under a slow pace, terrible dialogue and annoying characters.  Save yourself the $10+ it would cost to see White House Down in theaters and wait a few weeks and check out Olympus Has Fallen when it hits DVD/Blu Ray.