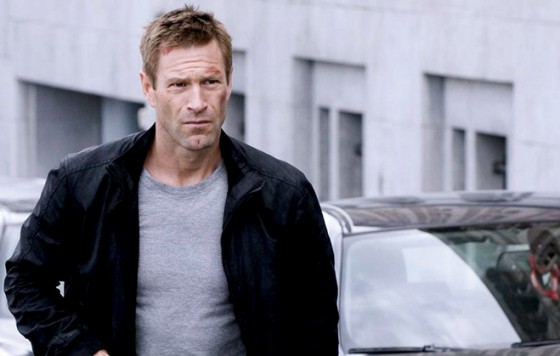 Since Taken exploded back in 2008, studios have been trying capture the magic of that movie with varying results.  Aaron Eckhart steps up to try and fill Liam Neeson’s ass kicking shoes and while Erased is only decent, he definitely has the potential to be an action star.

Eckhart stars as Ben Logan, a security expert working for a contractor in Belgium.  One of his co-workers discovers something strange with the patents of their security devices and some of the devices they have been given to test.  The next day, Ben arrives and finds the entire office gone, his phone wiped and his bank accounts empty.  He goes to the main corporate HQ and they’ve never heard of him or his office.  Obviously there’s something shady going on and that’s where the CIA and an evil corporation come in.  The setup of the situation is actually pretty effective as you find out the extent of how much of Ben’s life has been “Erased” but when the movie kicks into action mode, it pretty much drops that setup in favor of becoming a B-level Bourne movie, complete with a series of assassins to defeat and corrupt CIA agents to overcome.

Aaron Eckhart has had a couple of action roles like Battle: Los Angeles but this is really his first leading action role and he does as good a job as the movie allows.  *minor spoiler* It turns out that Logan used to be a CIA black ops agent, so he has expert level fighting skills, the ability to avoid detection at a busy train station and can instantly put together whatever evidence he collects.  Eckhart gets 2 decent fight scenes and a good. growly, interrogation scene.  The way he resolves the whole situation is also pretty clever as well.  I wouldn’t necessarily say Olga Kurylenko was wasted, but she is definitely not as prominent as you would think from the poster or trailer.  She is Logan’s former CIA partner who is now working for the evil corporation as well but doesn’t really get to do anything besides walk around angrily and is then dispatched after one of the most sudden changes of hearts I’ve seen.  Liana Liberato is pretty annoying as Logan’s daughter, Amy, who is unfortunately dragged along for most of the movie and does nothing but complain.

Erased is not going to revolutionize the action genre but if you’re a fan of Aaron Eckhart and the Bourne movies, it’s definitely worth a rent.  If Eckhart actually got a movie on the level of a Bourne or a Taken, I think he definitely has the action chops to pull it off.