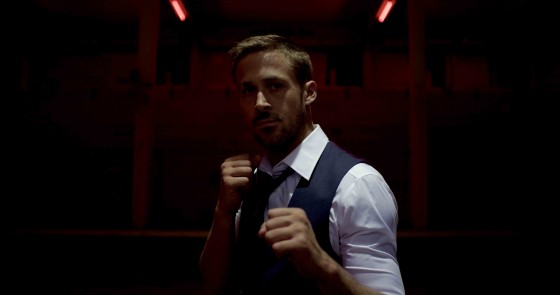 Nicolas Winding Refn is back collaborating with Ryan Gosling after their critical success with Drive in 2011 with another dark crime thriller, Only God Forgives.  Is it a worthy follow up?

Only God Forgives is set in Bangkok and follows Gosling as Julian, who is running a kickboxing gym/arena which is a front for his mother’s drug operation.  His sadistic brother, Billy, kills a young girl one night and is in turn allowed to be killed by the girl’s father by the enigmatic police officer Chang.  Julian and Billy’s mother, Crystal, flies in and immediately sets out to find out who was involved and orders them killed.  Plot is not usually the most important factor of a Nicolas Winding Refn movie but it does take a bit for the actual plot to get set into motion.  For the first half hour or so, you’re not quite sure where the movie is going or what the point is but things definitely pick up for the last hour.

Ryan Gosling may be top billed but he feels more like a side character as he doesn’t have any sense of agency or progression.  Because of the awfulness of his childhood, Julian is damaged beyond repair and wanders through his day to day life dead eyed and is only able to exert a small amount of control in a messed up relationship with a singer/hooker and getting into fights he knows he can easily win. In Drive, he was doing awful things but it was for the arguably noble reason of being a hopeless romantic and a chance at a normal life but there’s none of that in Only God Forgives; nothing is going to break Julian out of his awful life and there’s no hope.   The true star, to me, is Thai actor Vithaya Pansringarm as Chang, who is an absolutely fascinating and compelling character, a cop who dispenses his own brand of justice with a sword and then seemingly cleanses himself by singing karaoke.  Every scene with Chang is incredibly intense, even though he barely speaks, and you’re never quite sure how each scene will end.  Chang and Julian ultimately meet for a fight in Julian’s gym that is perfect in almost every aspect, from the music, the staging, the lighting, etc.  The cast is rounded out by Kristen Scott Thomas as Crystal, who is also incredible in how despicable she is.

The plot of Nicolas Winding Refn movies seem to be secondary to the style and Only God Forgives is absolutely oozing with style.  I think there’s only one or two scenes that are lit by natural light and every other scene is awash in reds, blues, yellows and purples and loaded with subtext and symbolism.  Even when horrific violence is happening, it’s still gorgeous to look at just by how it’s shot.  The soundtrack is not quite up to Drive’s level, with it’s fantastic selection of 80’s style synth pop but Cliff Martinez’s score, though sparingly used, is fantastic when it comes in and the song during the fight with Chang and Julian is incredible:

Only God Forgives is definitely not for everyone but if you are looking for a stylish, dark, violent crime thriller, it’s definitely worth a look, especially if you have been a fan of other Winding Refn movies like Drive.  You can get it on VOD right now and it’s also in a very limited theatrical run.