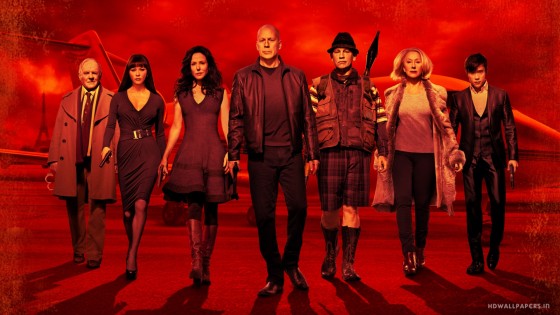 When the first Red came out in 2010, it was the same year that Expendables, The A-Team and The Losers came out.  What set Red apart was that it’s assembled team was all Oscar winners and nominees as opposed to classic 80’s action heroes or current action heroes.  Red 2 adds a few more prestigious actors and changes the setting to Europe and while it’s still fun, it’s also not much more than more of the same.

After stopping a conspiracy involving the Vice President in Red, Frank Moses (Bruce Willis) is back to trying to live a normal life with his girlfriend Sarah (Mary Louise Parker) but is pulled back into action when he and his best friend Marvin (John Malkovich) are accused of being nuclear terrorists when a report about an Operation Nightshade they were involved with.  The trio heads to Europe to hunt down the truth and have to dodge a CIA assassin played by Neal McDonough, the best assassin in the world, Han Jo-Bae (Lee Byung-Han) and even their old ally Victoria (Helen Mirren) is hired to kill them.  It’s kind of just a variation on the first movie’s plot and there’s a lot of plot beats that feel like they are happening at the exact same time they did in the first movie but there’s enough new with the new characters and setting to make it still pretty fun.

Much like the first movie, things don’t really get going until the entire gang is back together.  John Malkovich is hilarious again as the unhinged Marvin and there’s a great running joke about him trying to teach Sarah spy tricks, which aggravates Frank to no end.  Helen Mirren is definitely one of the highlights just like the first and is clearly having a blast firing all kinds of guns and getting to be a bad ass.  Anthony Hopkins joins the cast as Dr. Baley, the “Da Vinci of Death” who is a master of creating new kinds of weaponry and developed the Nightshade weapon that everyone believes Marvin and Frank stole.  He’s the complete opposite of most of his other roles in that he’s incredibly scatter brained and hyper and he’s fun to watch as well.  On the negetive side, Neal McDonough is completely wasted as CIA asset Jack Horton, who it appears will be the main villain when he’s introduced early in the movie but very quickly gets cast away and only appears in very brief scenes investigating the after math of the RED team’s actions in the various European countries.  When the true villain is revealed, it’s clear that McDonough’s characters was complete unnecessary.  It kind of feels like they took Karl Urban’s character from the first film and split it into two characters for this one, with Lee Byung-Han aka Storm Shadow getting to do all the awesome fights and action.

There’s some clever and fun action sequences just like in the first movie like a great scene in the beginning where Frank takes down a hit squad in a secret CIA building with nothing but file cabinets, chairs and whatever he can steal from the mercenaries.  Lee Byung-Han has an awesome fight scene in a Russian convenience store where he’s handcuffed to a glass refrigerator door but breaks it off and uses it for a weapon and he gets to team up with Helen Mirren for the climax, which is great.  The final sort of “Ocean’s 11” sequence is not quite up to the level of the first movie’s take down of the VP though.  The “PG-13” issue we’ve been dealing with for the last few years is  not as big an issue in this movie but it is noticable when characters are supposedly stabbed in the neck but it’s very awkwardly staged and you’re never quite sure what is supposed to be happening in those scenes.

If you enjoyed the first movie, Red 2 is more of the same but there’s still some fun action sequences and the characters are all still fun to watch.  I don’t know if you need to rush out the theaters to see it but it’s a definite recommendation for a matinee or a rental when it comes out on DVD/Blu Ray.