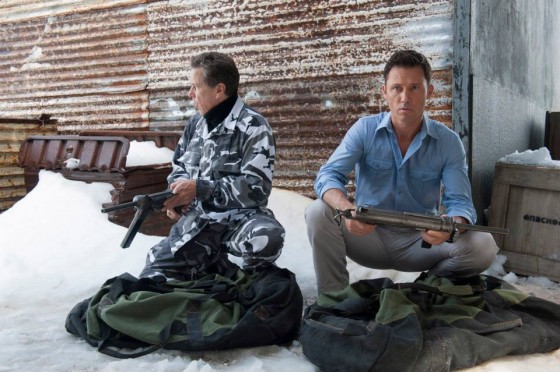 We journey into the mind of Michael Westen this week as he finally gets to meet the head of Sonya’s organization but has to prove that he’s truly ready to join them by enduring a brutal interrogation.

Things kick off with Michael, for some reason, telling Fiona that he slept with Sonya (not the best way to get back into Fi’s good graces) and then explaining that he’s finally going to meet the leader and possibly end the mission soon.  He creates a list of all his former missions but is surprised by Sonya tasering him and he wakes up in a mansion on a private island and comes face to face with James, the leader of the organization (Played by John Pyper-Ferguson, who was basically the Magneto of Alphas and also appeared on Grimm).  James says that they need to know what kind of man Michael truly is and they first put him through a series of sensory deprivation, sensory overload and isolation and Michael apparently passes into the next phase, which is the same thing only now Michael is injected with psychoactive drugs and starts seeing hallucinations, first Fi and then a flashback to the final mission he was on with Larry in Eastern Europe, where Michael blew up a factory full of people to kill a warlord who almost killed them.  The cool thing is that the flashbacks aren’t straight up flashbacks, they are Michael arguing with basically the “ghosts” of Larry and then later, his father (who we’ve never seen until now).

Elsewhere in Miami, Sam and Fi are keeping an eye on Sonya, who empties Michael’s loft and takes his belongings to an incinerator.  After a chase/car commercial for the Hyundai Genesis Coupe, the duo find the entrance to the private island and get Jesse to borrow a speedboat from Sam’s girlfriend, Elsa, and they arrive off the coast just in time to see Sonya dragging Michael out to the beach, since Sonya claims that Michael said something to cause James to want to kill him.  Michael decides to face James and surrenders and passes James’ final test and is welcomed into the group.  They release Michael afterwards and he recovers at Maddie’s house while they demolish the entire mansion that was on the island to hide any evidence.

It was a cool episode that was completely different from most every other Burn Notice with the Inception style journey into Michael’s darkest memories.  It was nice to see Tim Matheson again as Larry and finally seeing the monster that is Michael’s father.  We’re past the halfway point in this final season and things are getting darker and darker and we’ll have to see if Michael will succumb to his dark past for the sake of this mission or be able to save himself and live some sort of normal life.

When You’re A Spy: Sea Change

When You’re A Spy: Tipping Point

When You’re A Spy: Things Unseen