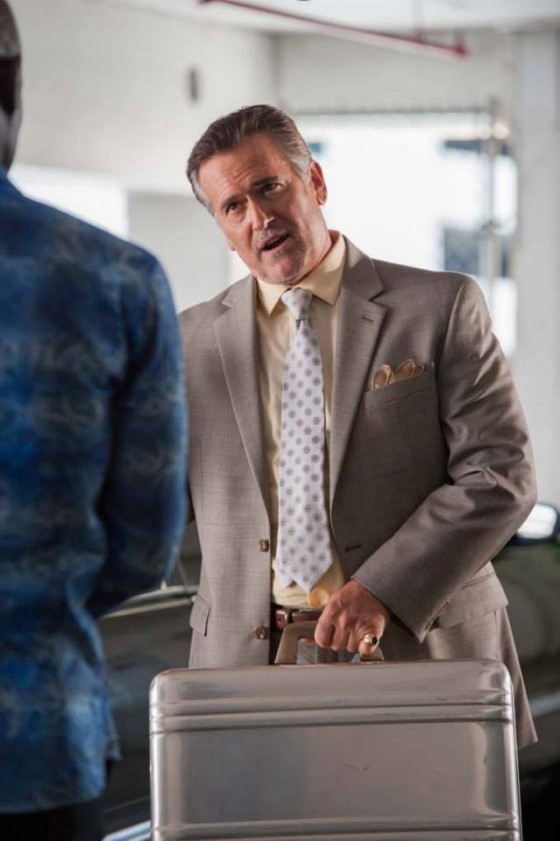 With Michael finally infiltrated into James’ rogue organization, he gets his first official assignment from James in this week’s episode.

The CIA dumbly assumes that they can now grab James at his first meeting in public with Michael but James drops him a cellphone and has him run down the street to where multiple identical cars are waiting.  Michael gets in one and the others go off in multiple directions, leaving the CIA clueless as to where Michael is.  The car brings Michael to James in another gigantic house the organization just happens to occupy and gives Michael an assignment to go back to the Dominican Republic and capture a corrupt drug enforcement officer named Marco Cabral (played by the second Spartacus alum to show up this season, Peter Mensah aka Doctore).   Michael recruits Sam to head down with him and they come up with a plan to have Sam pose as a member of a rich consortium, who will offer Marco a deal to work for them, instead of MI6, who is currently giving Marco protection in exchange for him giving them all the evidence on his drug smuggling operation.  Marco is unwilling to deal with “Charles Finley” so they regroup and decide to make it seem like MI6 is unable to protect him and they fake an assassination attempt by blowing up the boat Marco was going to flee the country on, which Michael is forced to detonate underwater at dangerously close range.  Marco immediately calls Sam and they meet in a parking garage but Sam’s efforts to get Marco away from his security team makes him suspicious and forces Michael to ram the limo into the security team’s SUV and Sam to knock out Marco with a metal briefcase full of money and they head for the rendezvous with James.  The run into one last obstacle on the road to the marina in the form of an armored truck with a .50 calibur machine gun.  In order to get past, Michael switches shirts with Marco and puts on a head bag and they pull a fake prisoner surrender, where Michael gains control of the truck and they are able to meet James, but he doesn’t reveal where they are taking Marco and Michael and Sam are not allowed to go with him.

Meanwhile, Jesse and Fi are recruited by Strong to back him up when he interrogates a mental patient who James was paying to keep locked up.  They bring him to a hospital in Biloxi, MS but they learn he’s a former Delta Force member and he escapes but Jesse advises Strong to call in a disease outbreak to the CDC to lockdown the hospital and then they try and corner him but Jesse is knocked out and the patient, Peter Mollard, ties an IED around his neck but after a tense stand off, they convince Peter that they all want the the same thing, to take down James.  Back in the CIA’s HQ in Miami, Michael meets with Peter, who reveals James’ full name is James Kendrick and they were both Delta Force members who were given orders to wipe out a village in Mogadishu that was full of women and children, orders which most of the squad followed.  Peter told James they should do something and James then slit the throats of the entire unit in their sleep and made it seem like he and Peter were KIA as well.  Peter tried to stop James but James had him locked away, so that’s why Peter now wants revenge.

Both plots were actually really good this week, with a classic Burn Notice con mission with Michael and Sam and a kind of reverse Die Hard situation with Fi and Jesse.  They are definitely trying to make James’ organization sympathetic as James has a whole speech about how he used to work for monsters and now they work to take out the monsters and Michael admits he feels himself getting to close to Sam.  It was great seeing Peter Mensah, and apparently someone on the Burn Notice casting team loved Spartacus.  We’re past the halfway point now for this final season and it seems like Michael’s allegiance to both the CIA and James’ group are going to be tested even harder going forward.

When You’re A Spy: Brother in Arms

When You’re a Spy: Down Range