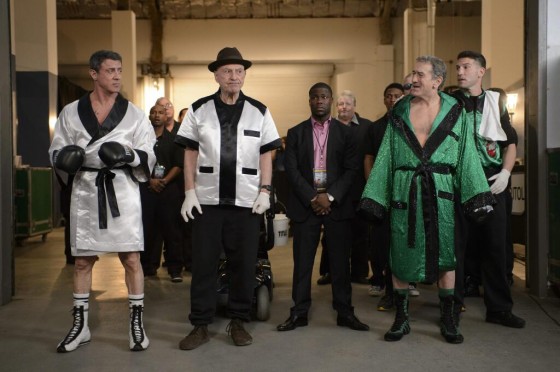 Raging Bull and Rocky, the two greatest boxing movies in cinema history and now De Niro and Stallone will finally meet face to face in the ring in this Christmas’ “Grudge Match”.  Stallone plays boxer Henry “Razor”  Sharp while De Niro plays Billy “The Kid” McDonnen who both won a major match against the other back in the 80’s but a third, tie-breaker fight was never fought.  After a motion capture session for a boxing video game ends in a viral rumble between the two, a rematch is set up between the two.  Alan Arkin plays Stallone’s cranky dad and Jon Bernthal plays De Niro’s estranged son.  Kevin Hart and Kim Bassinger also co-star.  It looks like a solid mix of comedy and some drama and I’m pretty much sold with the combo of Stallone and Arkin.  The movie is out Christmas Day and you can check out the trailer below.

Jake LaMotta Returns to the Screen in The Bronx Bull (Trailer)