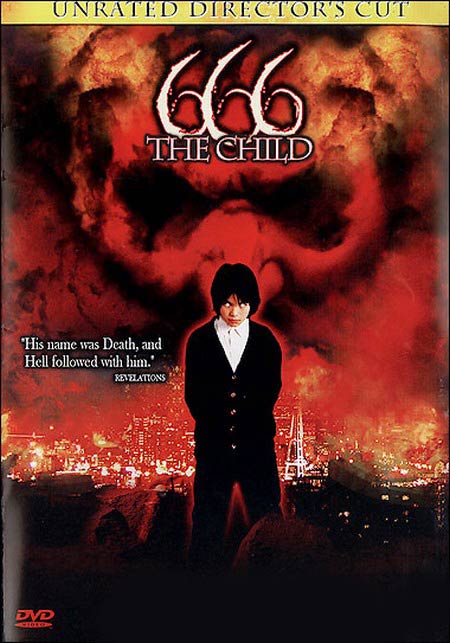 Most people have forgotten that there was a remake of The Omen in 2006 but probably fewer people realize that The Asylum tried to capitalize with their take on the “demon seed” genre with 666: The Child and thanks to some hilariously over the top deaths, it’s probably the best Asylum movie so far in this grand experiment.

So there’s no one recognizable again?:  Well, if you’ve been keeping up with Enter the Asylum, you may recognize Sarah Lieving from King of the Lost World  and the movie also “introduces” the acting phenom that is Boo Boo Stewart as evil kid Donald.

Wait, the spawn of Satan is played by a kid named Boo Boo?: Yup and despite his unfortunate name, he’s not bad as the creepy demon kid, especially considering that A) it’s his first movie and B) his first movie is an Asylum movie.  It’s not going to bring about a new paradigm in acting, but it’s serviceable.

How much like The Omen is it?: Pretty close, Donald is the spawn of Satan, about to bring about the end of humanity on the 6th day of the 6th month of the 6th year of the 2000’s and he has telekinetic powers that allow him to cause accidents for people who get in his way, or simply annoy him, like right in the beginning of the movie when he kills a nurse and doctor having sex in the janitor’s closet right next to his room in the hospital.

Donald survived a plane crash and his adopted by news reporter Erika and her major dude husband, Steve, who’s only claim to adopt Donald seems to be that Erika reported about him and Steve shot video of him at the crash site.

What other accidents does Donald cause? He kills his adopted grandpa with a ceiling fan for hurting him while playing baseball, kills a dentist and his nurse who are trying to check that he didn’t break any teeth during said accident.  The best kill though is probably when Donald unleashes every tool in Steve’s toolshed onto Steve’s stoner best friend, Tony.  They are all hilariously over the top and the Asylum spares no fake blood for all of them.

Do the parents ever get suspicious?: Well, Steve finally does when a creepy nun breaks into their house warning that Donald is evil and when their super hot new nanny, Lucy, arrives and acts super suspiciously.  Steve scours sub Geocities satanic websites, gains absolutely no useful info and then finally visits the horribly burned priest who ran Donald’s former orphanage, who reveals the truth.  Erika is never suspicious because she disappears for over half the movie and is eventually killed when Donald’s action figure somehow ends up in her New York City hotel room and she trips and falls into her glass shower doors in a gushing fountain of blood.

They kill the mom?: The dad too, Steve tries to kill Donald but a cop, who may be some sort of demon or satanic servant, shoots Steve in the head and turns Donald over to his Martha Stewartesque aunt.

So Donald gets away with it?: I guess,  it doesn’t seem like he’s bringing about the Apocalypse yet, as he seems preoccupied with making Christmas sugar cookies with his Aunt but there is a sequel that we’ll probably get to eventually called 666: The Beast.

Is it worth watching? I would actually say yes.  It’s a few tweaks away from being a hilarious parody of the “evil child” genre with all the cliches you would expect and there’s wonderfully awful dialogue and the aforementioned hilariously over the top deaths, which are the highlight of the movie.  It’s also barely over an hour long, so it won’t take up too much of your time..

Next Time: A killer stalks a small town on Halloween Night

Enter the Asylum: Princess of Mars

Enter the Asylum: Snakes on a Train
666: the child accidents apocalypse boo boo stewart deaths demons enter the asylum fake gore final destination horror over the top the asylum the devil the omen