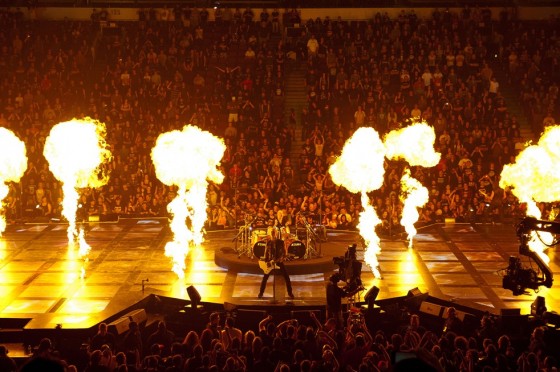 There’s been a slew of 3D concert movies over the past few years but they’ve been aimed mainly at teenage girls with acts like Katy Perry, One Direction, Justin Beiber, etc.  Metallica explodes into that arena with the world’s largest concert stage and a side story featuring Chronicle’s Dane Dehaan trying to survive a massive riot while on a mission for the band.

Cut together from a series of concerts back in August of last year, Metallica rocks their way through most of the title tracks of their albums, including Enter Sandman, Master of Puppets, Kill Em All, Ride the Lightning, And Justice for All and more.  Every song is accompanied by a massive set of effects, whether it’s a tesla coil blasted electric chair for Ride the Lightning, a graveyard rising out of the stage for Master of Puppets or a giant statue of Lady Justice for And Justice for All being built and then destroyed during the song.  The sheer engineering and synchronization on display is mind blowing and the stage is unbelievable, the floor being made up almost entirely of LEDs displaying an array of images and effects and there’s also plenty of flamethrowers, smoke, lasers and every other type of concert effect you expect from Metallica.

The way the concert is shot is also fantastic.  Director Nimrod Antal, previously of Predators, brings you about as close to the action on stage as you could ever want and there are great sweeping shots panning around the stage, focusing on the band members as they rip off solos and flying over the sold out crowd.   No matter what you might think about them off stage, on stage, Metallica is one of the most exciting bands you will ever see and they are definitely throwing everything they have into this concert.   The 3D just adds to the feeling of literally being on stage with Metallica and it’s easily one of the best uses of 3D I’ve seen.

You’ll probably notice I haven’t talked about the Dane Dehaan fictional parts of the movie yet and that’s because they were a little disappointing.  Dehaan plays Trip, a rookie roadie for Metallica who is sent out to retrieve a truck that’s run out of fuel in the middle of the city.  There’s definitely some cool stuff going on in these sequences, like the opening where all the members are introduced in an almost action or super hero way as Trip makes his way backstage and when the riot begins in earnest, it’s almost apocalyptic in scope.  There’s also a pretty cool “villain” in the form of a gas mask wearing horseman who is stringing random people up on streetlights.  The problem is that a lot of the time, these sequences feeling jarring or are underwhelming after witnessing Metallica rip through an effects powered hit.  They also don’t really seem to relate to the songs they are set to in a meaningful way, except for a few times, like when the riot police beat their shields in beat with the opening of Cyanide.  Metallica definitely adds a layer of bad assery to everything going on but it would have been cool if there was more going on thematically in the Trip sequences.  You also get a major clue early on that everything may just be in Trip’s head, which makes it a little bit more irrelevant.

If you’re a fan of Metallica and don’t think you’re going to be able to see them in concert in the near future, this is the next best thing.  Obviously, if you’re not a Metallica fan, there is absolutely no reason to see this movie but if you are a fan, throw up the horns and get ready to rock.