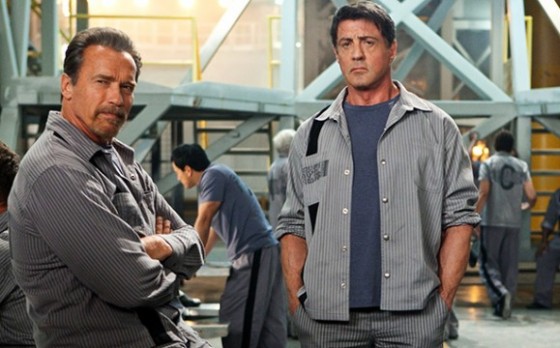 Stallone and Schwarzenegger, two of our patron saints, had solo movies earlier this year that were decent but not great and when we heard about Escape Plan, it seemed like the movie we were hoping for for some old school action.  Unfortunately, Escape Plan is still just a decent action movie, even with the combination of two action juggernauts.

Stallone stars as Ray Breslin, a security expert who operates a company that is contracted to test prison security by inserting Ray in and then having him break out.  He’s approached by the CIA to go into an off the books prison for highly dangerous international criminals and he agrees, but once inside, he realizes someone set him up as the warden is the sadistic Hobbes (Jim Caviziel) and his prison guidelines were used to make “The Tomb” seemingly escape proof.  He teams with fellow inmate, Rothmayer (Schwarzenegger) to attempt a break out.  Despite the high tech trappings, Escape Plan is essentially in the vein of classic prison movies like Escape from Alcatraz, where Stallone and Schwarzenegger gather materials and allies to execute their escape.  It’s not as action packed as you might expect but it remains pretty fun for the most part.  It’s a little long at almost 2 hours, especially as they kind of cover the same ground over and over with Hobbes beating Breslin and Rothmayer and attempting to discover the location of Rothmayer’s Robin Hoodesque partner, Manheim.

One of the major things the movie fails at is utilizing it’s cast.  When you have someone as talented and delightful as Amy Ryan, you should probably give her something fun to do but she and 50 Cent are absolutely useless and could be cut out of the movie with 0 change to the plot.  It seemed from the trailers that they would be working on the outside to find and rescue Stallone but they have maybe 5 minutes of screen time once Stallone enters The Tomb and it’s mainly to angrily demand to know where Stallone is from Vincent D’Onofrio and then getting told everything is fine.  Vincent D’Onofrio’s character is also incredibly bizarre as Ray’s partner, who it is immediately obvious is the one who set him up and he seems to be attempting to convey that his character has some sort of OCD or autism but it comes off as just stilted and weird.  Everyone in the prison fares much better.  Jim Caviziel seems to be reveling playing an absolute asshole and give Warden Hobbes this calm but sadistic attitude.  Vinnie Jones does his typical thug/tough guy thing as Hobbes right hand man and Sam Neill is the prison’s doctor.  Schwarzenegger and Stallone have some great back and forth, with Schwarzenegger playing the comic relief to Stallone’s grim straight man.

The look of The Tomb is pretty cool with it’s faceless guards, multiple scanners and cameras and elevated, glass prison cells.  Once the initial cool factor wears off though, it just becomes sort of a standard prison with typical exploits that Stallone can utilize in his escape.  There’s a lot of prison movie cliches as well like faking a fight to get to solitary or the doctor, the rival who becomes an ally or constructing some sort of device from stolen material.  Once everything comes together, Escape Plan has a pretty good action climax but the end answers one question and raises about five more as it tries to have a clever “twist” on what really was happening.

Even with the combined forces of Stallone and Schwarzenegger, Escape Plan unfortunately does not surpass either of their solo efforts from earlier this year.  It’s not a bad movie but it’s not the great action throwback we were hoping for either.  I would say if you want to catch in theaters, try to catch it as a matinee, otherwise it will definitely be a solid rental when it comes out on DVD/Blu Ray.