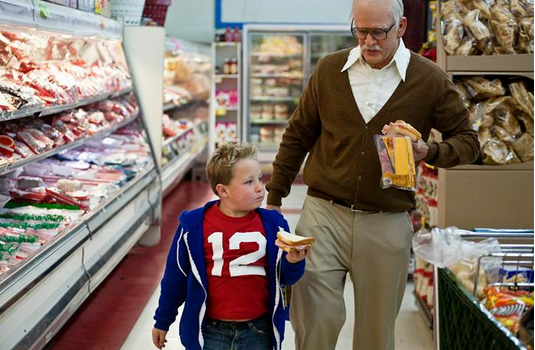 For the fourth Jackass movie, Johnny Knoxville and director Jeff Tremaine put the focus entirely on one of the most ridiculous characters created by the series, 86 year old horn dog Irving Zeisman.

Unlike the other Jackass movies, Bad Grandpa actually has a loose plot that find Irving having to transport his 8 year old grandson Billy from Nebraska to North Carolina to get him to his father with his daughter having to go to jail yet again for drugs.  The plot is really just a thin excuse to lead into each set piece prank, which are clearly the main focus as always.  The movie cuts away from sequences where Irving is about to get punched out or the cops called on him to Billy and Irving back on the road with seemingly no consequences.  One of the most bizarre choices is that the movie has an actual dramatic, emotional confrontation as it’s climax, that is slightly ridiculous as it involves the Guardians of Children biker group, but it’s still pretty jarring for a Jackass movie as you’re waiting for a comedic payoff that doesn’t come in that scene.  I do enjoy the increasingly bizarre backstory that Knoxville and the crew are building for Irving, with vague references to being overseas in combat and his prolific romantic history.

Bad Grandpa kind of commits the cardinal sin of comedy movies in that most of the best jokes you’ve already seen in the trailers.  The big climax at the beauty pageant that Billy infiltrates was basically seen in it’s entirety in the trailer, save for some damning interviews with a rival contestant and her self absorbed mother.  The two funniest sequences that weren’t in the trailer are a section where Irving goes to play bingo and drinks the ink of his marker, pulls out a margarita blender and hits on the ladies at his table and a visit to a St. Louis bar that is featuring male strippers and Irving gets in on the act to impress the ladies in attendance with disastrous results.  It also takes a little bit for Billy to get fully involved in the pranking but the movie definitely picks up when the duo is teaming up to prank random people.  Jackson Nicoll is more than able to keep up with his veteran co-star.  Possibly because of Nicoll’s presence, this feels like the nicest and tamest of the Jackass movies.  There are still a few outrageous sequences but nothing as outright disgusting as we saw in the other three movies and the majority is just Irving and Billy pranking random people with magic tricks or inappropriate behavior.  This is also the first Jackass movie I can remember where they show the reactions of the people being told they are shooting Jackass, which everyone is thrilled and relieved about and there doesn’t seem to be any of the prank attacking by the cast and crew like when the full Jackass gang is together.  It may be a good entry point to ease someone into the Jackass series.

Bad Grandpa is a consistently funny entry into the Jackass series but the biggest laughs you may have had were ruined in the trailer.  That being the case, you probably don’t need to rush to theaters to see it, especially since it doesn’t have 3D like the previous entry and there’s nothing that wouldn’t translate to the small screen the same.  Netflix has had the Jackass movies and Bad Grandpa would be a solid watch on there or as a rental.