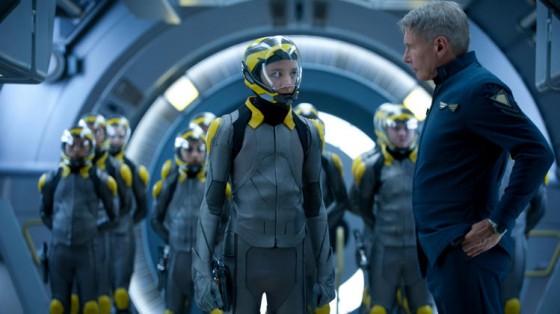 As the first big blockbuster of the winter season, Ender’s Game easily took the box office with $28 million over the weekend.  which is not quite Harry Potter or Hunger Games level but slightly better than some of the other failed teen novel adaptations like The Golden Compass.  It also benefited slightly from older fans who had read the book in school heading out to finally see a movie adaptation of the sci fi classic.  Bad Grandpa didn’t drop that much, only 36% for a solid second place/second week with $20.5 million.  Last Vegas was one of the better starts for CBS films, but considering their best opening is The Woman in Black, that’s not saying much.  It’s better than De Niro’s recent The Family but way off for Morgan Freeman, who had a couple movies that debuted around $29+ million.  Free Birds came in a pretty terrible fourth place, considering it had no competition at the box office, with only $16.5 million, which is worse than the probably superior Chicken Run’s opening.  Gravity rounded out the top 5 with another $16.2 million and cracked the top 10 for total worldwide gross for this year.  Down further on the list, the critically acclaimed 12 Years a Slave continues to expand and move up the charts, moving into 410 theaters this past weekend and moving into seventh place with $4.6 million while the time traveling romantic movie, About Time, opened in 175 theaters with a $1.1 million opening.  Thor is obviously going to destroy everything next weekend so it’s all about how much scraps the rest of the movies can collect.