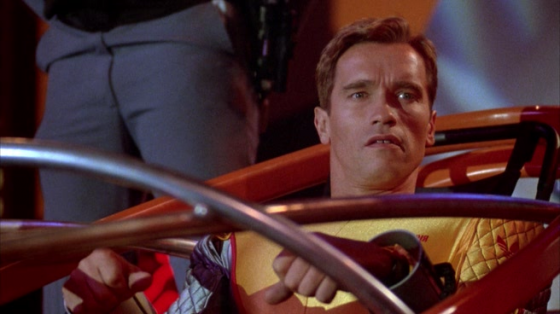 We have a delightfully insane music video for you in this week’s Musical Montage with the end credits song from The Running Man, John Parr’s “Restless Heart”.  Not really having anything to do with the movie, and weirdly not a song from either Mick Fleetwood or Dweezil Zappa (who co-star in the movie), the song is just a power ballad from John Parr about running away together and “shouting from the highest steeple”.  The music video is really where it’s at for this song, with every ridiculous 80’s cliche in full effect like lingering, unnecessary slow motion and close ups, random clips from the movie that make it seem like Parr is singing the song to Arnold and Parr getting incorporated into the film by zapping lightning, appearing on the public viewing screen and riding a motorcycle.  It’s pretty great and you can check it out below.

Musical Montage: Paul Simon “You Can Call Me Al”

Musical Montage: Over the Top