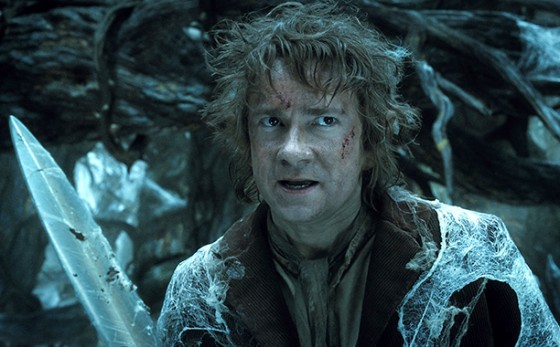 The second part of The Hobbit trilogy has finally arrived and while it definitely ups the action, the strain being put on a story that should not really need three films is starting to show.

Desolation of Smaug picks up a short time after An Unexpected Journey with Bilbo Baggins (Martin Freeman), Gandalf (Ian McKellan) and the dwarf company led by Thorin Oakenshield (Richard Armitage) still being pursued by the orc commander Azog and his warg riders.  After losing them in the mountains, Bilbo and the dwarves enter the Mirkwood Forest to continue their journey to Erebor while Gandalf heads off to investigate further into the mysterious necromancer building power.  After a run in with the wood elves, including the return of fan favorite Legolas (Orlando Bloom), Bilbo and the dwarves eventually reach the human town of Laketown and meet Bard the Bowman (Luke Evans) before finally reaching their destination of Erebor and get set for a confrontation with the dragon, Smaug (voiced by Benedict Cumberbatch).  The main quest of Bilbo and the dwarves is definitely the backbone of the movie and keeps everything from collapsing but in an attempt to pad the story to support three movies, there are tons of side plots that work at varying levels.  Some like the political struggle in Laketown between Bard and the corrupt, pompous ruler will most likely be hashed out in the third movie while Gandalf’s investigation is interesting but it’s treating something we absolutely we know the end result of as some grand mystery and while cool things are happening, it’s not going to amount to anything  shocking.  There’s also the slightly unnecessary addition of a love triangle between the dwarf Kili (Aidan Turner), Legolas and Tauriel (Evangeline Lily).  The movie also ends in the most frustrating spot imaginable, just as things were getting truly exciting.  Lots of people were annoyed by the Catching Fire ending, but that was where the book ended and the story of that movie was wrapped up, this just end right in the middle of things.

Even though the plot may be padded out and at the breaking point, when the movie switches to action mode, it’s usually always fantastic.  Maybe one of the most inventive and fun action sequences of the year finds Bilbo and the dwarves escaping from Mirkwood in barrels down a river while orcs pursue them and Legolas and Tauriel pursue the orcs.  There’s tons of things happening ranging from comic moments to bad ass moments and it’s one of the highlights of the movie.  The main highlight though is the climactic final confrontation with Smaug.  Just like Gollum and King Kong, WETA has outdone themselves again creating Smaug.  He’s suitably imposing and looks absolutely incredible.  Cumberbatch is the perfect voice for him as well, predatory, cunning with a hint of playfulness, you definitely get the sense of a cat playing with it’s food because it knows it can kill it any time it wants.  The final half hour/45 minutes is an extended chase/battle with Smaug through the depths of the dwarf kingdom of Ererbor but, like I mentioned above, the movie ends just as things are truly getting exciting with that battle, which is disappointing.  There’s also a great sequence when the group is captured by spiders and Bilbo must use the ring to rescue them which has the bizarre side effect of allowing him to understand the spider’s language.

If you saw and enjoyed the first Hobbit movie, you probably already saw The Desolation of Smaug and if you didn’t see the first film, you will probably want to watch it before tackling Smaug, because you will probably be lost about who everyone is and what is going on.  It’s a solid  second entry in the series and I can’t wait to see the third movie but the story definitely could have been told in two, more focused, entries.