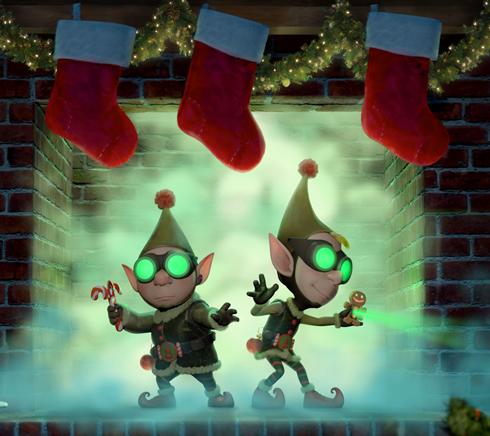 Disney first introduced us to the high tech world of Prep and Landing in 2009 and followed it up in 2011 with Prep & Landing: Naughty vs Nice.  Both of the specials follow the elite elves of Prep and Landing, who make sure houses are secure and ready before Santa arrives to deliver the gifts, and specifically the team of Lanny (Derek Richardson) and Wayne (Dave Foley).  In the first special, Wayne grows disgruntled after getting passed up for a promotion and disregards his Prep duties but has to to act fast with Lanny so that they aren’t responsible for the first ever kid getting passed by and in the second, Wayne teams up with his brother, Noel (Rob Riggle), who is a Coal Brigade elf, sent in to deliver coal to the naughty kids, and they have to recover a Naughty Calculator, which has fallen into the hands of a naughty kid attempting to hack Santa’s database.  Both specials are filled with tons of fun tech and puts a unique spin on everything Santa and there’s lots of great little Christmas jokes throughout, like classic lyrics and phrases getting turned into codewords and call signs.  Both specials are available below, thanks to Hulu, so definitely check them out.