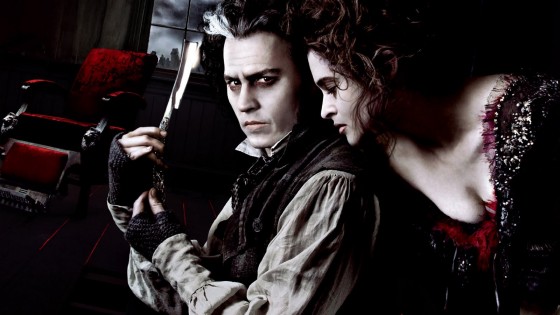 Created back in Victorian England when everyone was obsessed with true and fake crime stories, Sweeney Todd has been an urban legend for years.  Stephen Sondheim came along in 1979 and transformed it into possibly the bloodiest musical in history and Tim Burton took it to the extreme in 2007 with a ridiculously violent film version starring Johnny Depp and Helena Bonham Carter (obviously).  Depp stars as Benjamin Barker/Sweeney Todd, who returns to London after a wrongful imprisonment to get revenge.  He meets horrible meat pie maker, Mrs. Lovett, and together they come up with a plan for Todd to kill people in his barber shop and then turn the victims into the filling for the meat pies.   The songs might not be as instantly catchy as some other musicals but there are some standout ones like the ode to razors that is “My Friends” or the sweet but kind of creepy if you think about it “Johanna”.  Check out some of the songs below.

“The Worst Pies in London”

“Not While I’m Around”