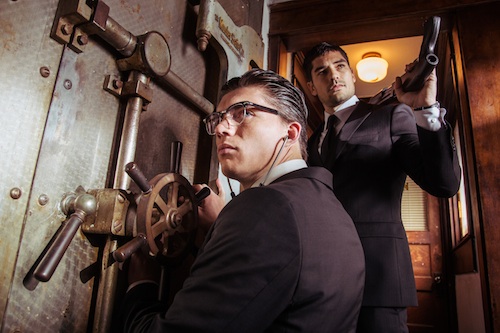 Robert Rodriguez’s El Rey Network launched last month but doesn’t quite have the most compelling programming yet, mostly airing movies, but the first major original show for the network is coming in March with From Dusk Till Dawn: The Series.  An expanded re-imagining of the original movie starring George Clooney and Quentin Tarantino, the show follows the Gecko brothers, with DJ Cotrona playing Seth and Zane Holtz playing Richie.  Don Johnson, Wilmer Valderama and Robert Patrick are set to co-star.   The show will expand on the mythology of the original movies while following an extended version of the original’s plot, where the bank robbing Gecko brothers kidnap a family and end up in a vampire infested strip club in Mexico.  From Dusk Till Dawn will be joined later on El Rey by a Lucha Libre reality show and Matador, from Kurtzman and Orci, that follows a soccer player who is secretly a CIA agent.  Check out the trailer for From Dusk Till Dawn below and head over to http://www.elreynetwork.com/ to find out where you can find the network in your neck of the woods.

From Dusk Till Dawn Season 3 Trailer