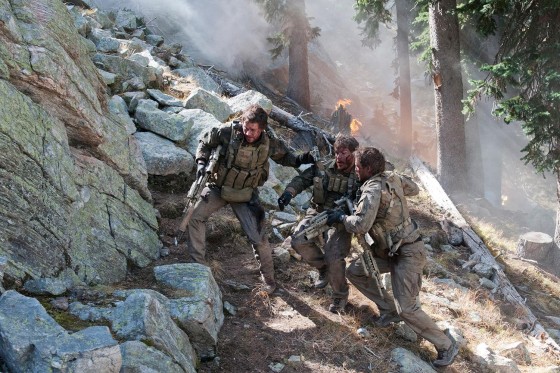 January is usually considered a dumping ground for movies studios want to get rid of but the flip side is that it’s also the month where a lot of critically acclaimed movies that had to get out in few theaters before the end of the year go wide.  One of the latter is Lone Survivor, one of the best war movies in recent years.

Based on the true story of Operation Red Wings, a mission in Afghanistan in 2005, where a four man SEAL team was sent in to recon and possibly eliminate Taliban leader Ahmed Shah.  After communication issues and a tough moral decision, the team is on the run from an overwhelming number of Taliban soldiers.  Based on the title, you can guess the unfortunate outcome of the mission and rescue attempt.

Mark Wahlberg plays the titular survivor, Marcus Luttrell while his team is filled out by Ben Foster, Taylor Kitsch and Emile Hirsch.  Because of the weight of the story and the passion that director Peter Berg (possibly trying to make up for Battleship) and Wahlberg clearly have for it, the characters never devolved into stereotypes like “the rookie” “the tough guy” etc.  They are just regular guys put in an impossible situation and the extended opening and trek to the operating area lets you get to know them, making it all the more worse when they start getting horrifically injured and killed.  The opening goes a little long but once the action kicks in, it’s pretty much non-stop.  The movie also is refreshingly light on political leanings or just being propaganda.  It’s comparable, IMHO, to Black Hawk Down where the story of the soldiers and the mission are the main priority and you can read into the movie if you want.  There’s no shady dealings that caused Red Wings to fail, just a combination of bad luck, underestimation of the danger and trying to do the right thing.  Another thing the movie does is present both sides of the Afghani people as Luttrell was ultimately rescued and protected by a village of people who were fiercely anti-Taliban and gave up their lives to protect him from the Taliban until a rescue team could arrive.

Battleship was definitely a bit of a misstep for Peter Berg but Lone Survivor is pretty much the exact opposite of that CG monstrosity as, once the action starts, you are in the thick of it for the rest of the film with the SEALs and you feel every bullet taken and explosion hitting.  There are two sequences of gut wrenching falls that was played for comedic effect in one of Berg’s other films, The Rundown, but is cringe inducing in how hard and how far the SEALs fall down rocky hills.  It all feels incredibly gritty and realistic, probably helped by Luttrell actually being on set advising.

There’s been a bunch of movies about the war in Afghanistan in recent years but Lone Survivor refreshingly lacks any sort of political leaning and doesn’t preach about whether or not we should be over there.  It just tells this incredible true story in a way that’s exciting but also gut wrenching.  The acting is top notch, it’s shot great and is definitely worth checking out now that  it’s probably in a theater near you.