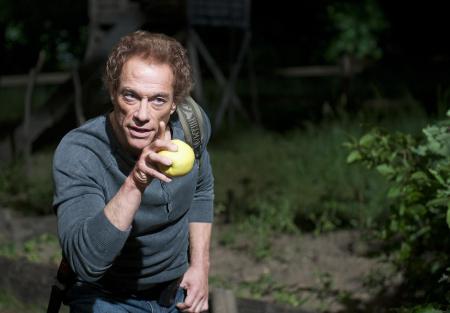 Jean Claude Van Damme, one of our patron saints, has had two movies appear recently on Video on Demand, one where he plays another excellent, crazy villain and another that is his first foray into comedy.  I’ve checked both of them out so read on to see what I though about this double dose of Van Dammage.

Enemies Closer is the latest from After Dark Action and is directed by Peter Hyams, who has worked with Van Damme previously on Timecop and whose son, John, directed the last two Universal Soldier movies.  With that pedigree, it’s not surprising that Enemies Closer is a bad ass, old school action flick.

Tom Everett Scott plays Henry Thomas, a former NAVY diver who has retired to the remote national park of King’s Island, on the border of the US and Canada.  After a typical day of assisting tourists, and rescuing one comely young hiker named Kayla who sets up a date later that night, Henry is surprised by the arrival of Clay (Orlando Jones), a man seeking revenge on Henry for letting his younger brother die in Iraq.  Henry tries to explain what happened but Clay is not having it and marches Henry out into the woods to execute him.  Both men are then surprised by a third party, Xander (Van Damme), who is leading a team of mercenaries to recover a shipment of heroin that crashed into the lake.  Clay and Henry must then create an uneasy alliance to survive Xander and his men.  It takes a little bit to get going but once all the players arrive, the movie is pretty much a non stop chase through the woods.

Van Damme goes all out as the vegan/enviromentalist villian Xander, constantly expressing his distaste for guns before brutally killing someone with a knife, stick or his bare hands or delighting in the various berries he discovers on the island.  He’s the kind of villain who is so unhinged and dangerous that you never know exactly what he is going to do next and is tons of fun to watch.  Tom Everett Scott and Orlando Jones have a pretty good back and forth and, as expected, grow a begrudging respect for each other as the ordeal goes on.  They are both surprisingly great in the fight scenes as well, which borrow the “nothing will be left unbroken in this room” philosophy that made US: Day of Reckoning such a fantastic action movie.  If you’re an expert in action movie plot structure, you may be able to predict some of the twists but it’s so well done that you probably won’t care.

If you’re a fan of Van Damme in particular and old school action in general, you should definitely check out Enemies Closer on VoD now or DVD and Blu Ray eventually.

Welcome to the Jungle

Although you could argue that movies like Street Fighter were unintentional comedies, Welcome to the Jungle is JCVD’s first official foray into the genre and he seems fully on board to spoof his action persona.

Van Damme co-stars as Storm Rothchild, a former Marine who now brings office drones on extreme survival team building trips.  The employees of Crawford Design, which includes Adam Brody, Rob Huebel, Kristen Schaal, Eric Edelstein and Megan Boone, are sent on the trip by their boss, Dennis Haysbert, but things quickly turn bad when the decrepit old pilot dies of a heart attack and then Storm, the only other person who can fly the plane, gets attacked by a rogue tiger and is seemingly killed.  Chris (Brody) has a bunch of very sensible and useful survival tips but alpha male asshole Phil (Huebel) takes over the group and they quickly devolve into a primitive, Lord of the Fliesesque tribe, leaving Chris, Lisa (Boone), Brenda (Schaal) and Jared (Edelstein) on their own to try and get off the island.  It’s definitely one of the best jokes when you see how quickly things escalate with Phil in charge.  The sensible quartet is seemingly only gone for at most 2 days but when Chris comes back to try and negotiate, the group has developed an entire mythology around Phil, who becomes Orco the Lawgiver, who the group worships and somehow erected a statue to.

Van Damme is definitely the reason to see Welcome to the Jungle.  The rest of the cast is funny but Van Damme is hilarious as Storm, putting the team through insane team building exercises and delivering bizarre turns of phrase.  He’s the who actually gets to reference Lord of the Flies when he describes the plot but then spins it off into a bizarre, hilarious rant about Pinocchio and Pleasure Island.  Adam Brody and Megan Boone are kind of the Jim and Pam of the movie, although Jim never had to challenge Dwight to a death match in the Pit of Sorrow.  If you’ve seen Kristen Schaal and Rob Huebel in other movies, they are pretty much doing their usual thing, although Rob Huebel definitely pushes to the nth degree here and Schaal gets to go on some great, curse filled tangents, so that’s fun.  I didn’t find it non-stop funny but it’s solid throughout with some stand out bits, most involving Van Damme.

Without Van Damme, Welcome the Jungle would probably still be pretty funny but the including of JCVD definitely takes it to the next level.  I would definitely be open for more comedic roles from the Muscles from Brussels if this is his first effort.

Welcome to the Jungle Trailer