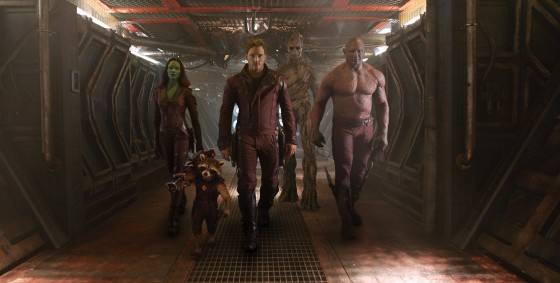 Arguably the strangest team in the Marvel universe is coming to the big screen this August with the Guardians of the Galaxy.  The intergalactic team of “heroes” consists of Peter Quill aka Starlord (Chris Pratt), Rocket (Bradley Cooper), a raccoon like alien who loves stealing vehicles and giant guns, Groot (Vin Diesel), an incredibly strong tree-like alien who is Rocket’s best friend, Drax (Dave Bautista), genetically engineered to kill Thanos and Gamorra (Zoe Saldana), the galaxy’s most dangerous woman.  They usually go against Thanos, who was set up at the end of Avengers, and other intergalactic threats.  Based on the teaser at the end of Thor 2, the Guardians will most likely will be on the hunt for at least one of the Infinity Gems and get it before Benicio Del Toro’s Collector gets it.  James Gunn, of Slither and Super, makes his huge blockbuster debut and it looks like it’s definitely going to have his sense of humor in between the crazy space action.  Check out the first trailer below.

The Guardians Are Back in the First Teaser for Vol. 2 (Trailer)

EA Reviewcast: Guardians of the Galaxy

Roundhouse Review: Guardians of the Galaxy