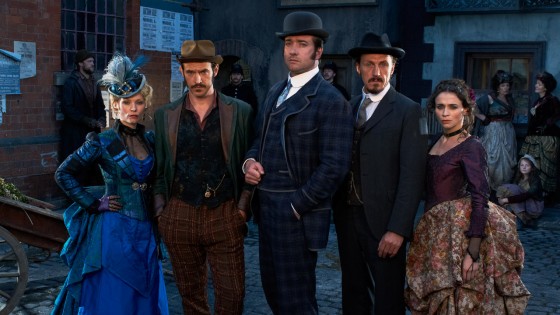 A little overshadowed by it’s fellow British crime shows Sherlock and Luther, Ripper Street is a fun crime procedural show that is definitely worth checking out.  The second season starts tomorrow (2/22) and the show, set in 1889-1890, follows Inspector Reid (Matthew Macfadyen) and Sgt. Drake (Game of Throne’s Jerome Flynn) as they investigate crime in very recent wake of the Jack the Ripper killings.  One of the fun parts of the show is that it’s set at time when modern technology is starting to come into use and many of the cases utilize forensic science, done by the drunken, philandering American, Homer Jackson (Adam Rothenberg).  There are also cases involving the first electric subway in London, an early piece of film and more.  It’s basically like Guy Ritchie’s Sherlock Holmes mixed with CSI.  Check out a recap of the first season below and check out the second season tomorrow at 9 PM EST on BBC America.