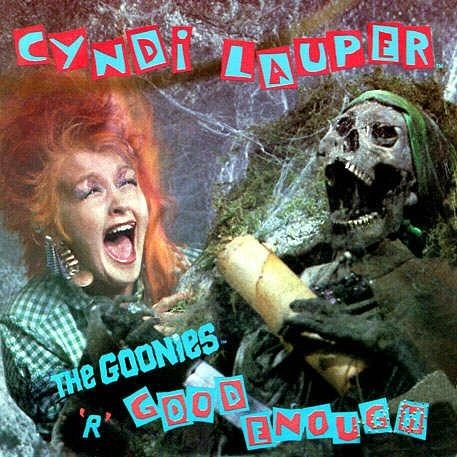 With a movie as iconic and classic as The Goonies, a simple 2 or 3 minute music video for it’s theme song “The Goonies R Good Enough” just wasn’t going to cut it, so Cyndi Lauper created a two part 10+ minute epic featuring half of the WWF, most of the actual Goonies and had director Richard Donner direct it.  The video basically replicates the plot of the movie, just with Cyndi Lauper trying to save her family’s gas station from evil creditors Rowdy Roddy Piper, Iron Sheik and Classy Freddie Blassie .  Her father, Captain Lou Albano’s father hid some sort of treasure and Cyndi discovers a map and sets out to find it, crossing paths with The Bangles as a group of female pirates and some of the same traps as The Goonies.  The video was divided into two parts, one premiering before the movie and one premiering on MTV after the movie debuted.  Check out both parts below.