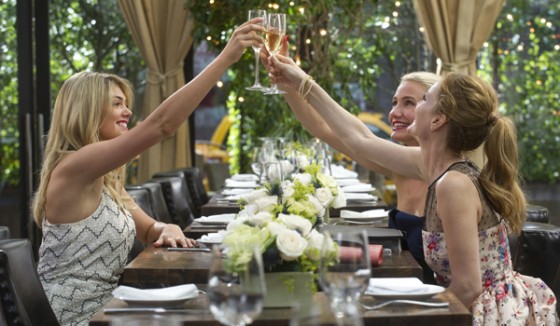 All the wives and girlfriends who were dragged to Captain America: The Winter Soldier over the last few weekends seem to have gotten payback as The Other Woman took the top spot at the box office.  The movie took in $24.7 million, not quite up to the level of a movie like Bridesmaids but still much better than recent efforts by Cameron Diaz and more recent female-focused comedies.

Cap 2 fell to second with another $16 million, putting it over $224 million domestic and it should top out over $250 million, although rival Marvel movie The Amazing Spider-Man 2 hits this weekend and will most likely dominate ticket sales.

Heaven is for Real dropped to third with $13.8 million, putting it just under $52 million.  It’s the best performing of the recent Christian aimed slew of movies.

Rio 2 and Brick Mansions rounded out the top 5, with the latter making $9.6 million, putting it on the low end of the recent Luc Besson/Europcorp movies like The Family and 3 Days to Kill.

The Quiet Ones was a massive bomb this weekend with only $4 million, the lowest ever opening for a supernatural/possession movie in over 2,000 theaters.  It’s also tied for the lowest opening of the year with the already forgotten Vampire Academy.

Battle at the Box Office 5/5

April Movie Preview
Battle at the Box Office brick mansions captain america: the winter soldier heaven is for real rio 2 the other woman the quiet ones weekend box office totals