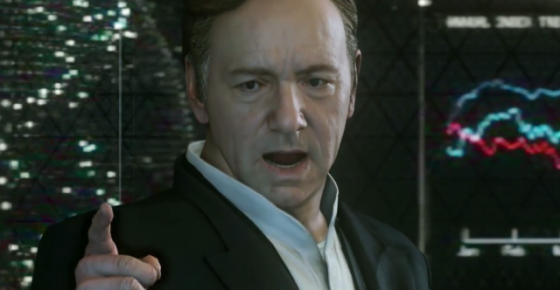 Call of Duty became the juggernaut it is today by shifting from World War II to “Modern Warfare” and it looks like they are trying to do that again with the next game in the series, Advanced Warfare.  Taking place in the future where there looks to be all kinds of futuristic gadgets to play with like jet packs, exo-skeletons, full combat armor, drones and all kinds of vision modes, basically upping everything from the craziest game of the series so far, Black Ops II.  The big draw for this new one, besides being for the next gen consoles, is that Kevin Spacey will be starring in the game as potentially the main antagonist, who, according to some reports, is the head of some sort of PMC.  It looks like Spacey’s performance was fully captured for the game with facial and movement to go along with his voice acting.  The game is being made by Sledgehammer Games, not Treyarch or Infinity Ward, who have been alternating CoD games since World at War/Modern Warfare 2.  The game should hit this Fall for XBox One, PS4 and PC and you can check out the trailer below.