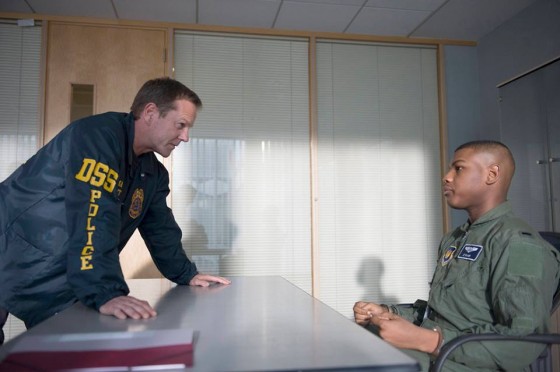 Jack manages to get into the US Embassy but things quickly get out of control as the Marines arrive and President Heller/Audrey find out that he’s in London.

After causing a “distraction” and shooting protestors in the leg at the end of last week’s episode, Jack takes out a security guard and manages to get in to talk with Lt. Tanner.  Jack tells Tanner that he believes he’s innocent and Tanner tells him that his flight key for his drone is on the body of the captain that Jack just knocked out.  Jack gets the key but has to leave Tanner in custody.  Chloe guides Jack to the bottom level so he can escape through a storage room but the Marines override all the doors, trapping Jack in the embassy.  Deciding the priority is the data on the key, Jack takes over a secure communications room and starts decrypting and uploading the data to Chloe and Open Cell, but the terminal he’s using is only a single core, so the decryption will take at least 30 minutes.

Back at Parliament, President Heller manages to calm the angry delegates and delivers his speech about the drone attack and the loss of the men involved.  Steve Navarro calls Mark and informs him of the hostage situation at the embassy, leaving Mark no choice but to inform Heller and Audrey that Jack is in London.  Heller wants to talk to Jack and Jack explains the situation to him.  Heller and Audrey believe Jack is telling the truth about the attacks but Mark manages to sway Heller by bringing up Jack’s revenge fueled rampage in NYC in Season 8, so Heller agrees to authorize the Marines to storm the room whenever they are ready.

Kate and Eric, meanwhile, have talked to Tanner and, along with what Jack told her at the housing projects, Kate is beginning to believe Jack about the attacks and climbs into the vents above the comms room so she can talk with Jack.  She manages to convince Jack to let her take him into custody and she’ll finish the decryption of the flight key so they have the evidence of tampering.  The Marines storm the room but Kate gets them to back down and she and Eric handcuff Jack and get ready to bring him back to CIA HQ.

At Margot’s compound, Navid tries to get Simone to escape with him but Simone informs Margot, who forces Navid to pilot the drones by pulling a Game of Thrones style manuever and having one of her goons chop off one of Simone’s fingers.  Margot’s son manages to get the device integrated with their system and they select the 10 most heavily armed drones and reroute them to head for London, where Navid will use them to launch the attack.