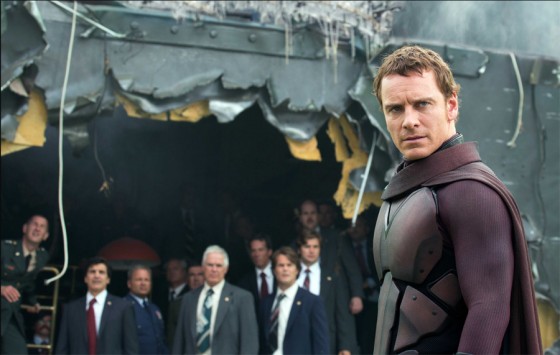 Everyone is scrambling to catch up to Marvel Studios and their Cinematic Universe but Fox is definitely in a solid second place with their X-Men series.  After course correcting with First Class and The Wolverine, original director Bryan Singer returns to merge everything together in the biggest X-Men movie to date, Days of Future Past.

Based on the classic story that was adapted by the 90’s cartoon previously, Days of Future Past finds the original X-Men in a losing battle in the future, facing an unstoppable army of Sentinel killing machines.  Their last chance is to send Wolverine (Hugh Jackman) back in time to 1973 and stop Mystique (Jennifer Lawrence) from killing the Sentinels’ inventor, Bolivar Trask (Peter Dinklage) and the events of the future in motion.  Logan has to unite the younger versions of Charles Xavier and Magneto (James McAvoy and Michael Fassbender) in order to get through to Mystique.  If you’ve been following the series through the highs and lows *cough* X-Men Origins: Wolverine *cough*, you’ll be rewarded with tons of references, cameos and easter eggs from all the previous films and this movie does a great job of bridging the First Class/Wolverine movies with the original trilogy.  It’s also just a fun, crazy comic story with time travel, killer robots, DNA splicing and apocalypses.  There’s not a lot of explanation for how, for example, Kitty Pryde (Ellen Page) is able to transport people through time but if you roll with the movie, you’ll have a blast.  Just like First Class, it also takes advantage of the 70’s time period, with Nixon having a pretty significant role and Vietnam and other events of the time factoring in as well.

Although Hugh Jackman is front and center, the real star of the movie, just like First Class, is Michael Fassbender as Magneto.  Days of Future Past has plenty of great, original sequences of Magneto unleashing his powers, like viewing classified Sentinel documents while stitching the back of his head up and he seems 2 steps ahead of everyone for most of the movie.  Hugh Jackman is great as always as Logan but is kind of put on the sideline as the mentor/comic relief for the First Class group.  He doesn’t really fully unleash his Wolverine side but there was an entire movie for that last year, so it’s not that big of a complaint.  Jennifer Lawrence is also good as Mystique but it’s a little strange that she’s suddenly the most important mutant in the X-Men universe.  James McAvoy is much darker in this movie than in First Class, where he was basically Austin Powers.  His big arc is basically weening himself off the mutant equivalent of heroin but he does get a fantastic scene with Patrick Stewart (unfortunately Fassbender doesn’t get to meet Sir Ian McKellan).  Peter Dinklage is great as usual too but Bolivar Trask’s motivations are not the most fleshed out (he wants to eradicate mutants but also kind of respects them?).  All of the new mutants introduced in Days are fantastic with Blink (Fan Bingbing) and Quicksilver (Evan Peters) being the standouts.  Marvel Studios definitely has their hands full trying to top the Quicksilver action sequence in Days, which is one of the funnest and most creative sequences in the series.  Pretty much all of the X-Men get at least one big showcase moment and the end would have worked as a great send off to the series, since you get to see practically everyone back  and alive,  but it also resets things for future installments.

Days of Future Past is easily one of the best entries in the X-Men series, arguably only topped by X-2.  The amount of fan service is fantastic and the story and the use of the powers is just a ton of fun.  If this is setting the tone for the future of the X series, we are in for a great ride.

X-Men: Days of Future Past Trailer #2