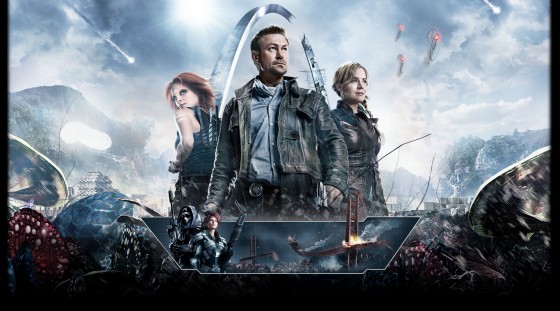 SyFy’s sci-fi/western Defiance is back for another season this Thursday and they’ve provided a quick recap of season 1 to get everyone caught up.  The show is set in a future Earth that has been ravaged by a war between humans and various alien races, called Votans, that ended with an apocalyptic event called Ark fall, where the alien ships in orbit suffered catastrophic failure and started crashing to Earth, contaminating and transforming  the areas surrounding the crash sites.  A peace is eventually established and Defiance is a frontier town in the former site of St. Louis, where aliens and humans co-exist in relative harmony.  Grant Bowler stars as Nolan, the reluctant lawkeeper of Defiance, who has an adopted alien daughter named Irisa (Stephanie Leonidas), who seems to be the key to some sort of massively powerful alien artifact.  Julie Benz plays Amanda Rosewater, the mayor of Defiance who is ousted by alien power couple Datak and Stahma Tarr (Tony Curran and Jaime Murray).  While not quite up to the same level, it definitely fills in the Serenity/Firefly niche.  Check out the recap below and the show is back at 8 pm Thursday on SyFy.

Up to Speed: Helix Season 2