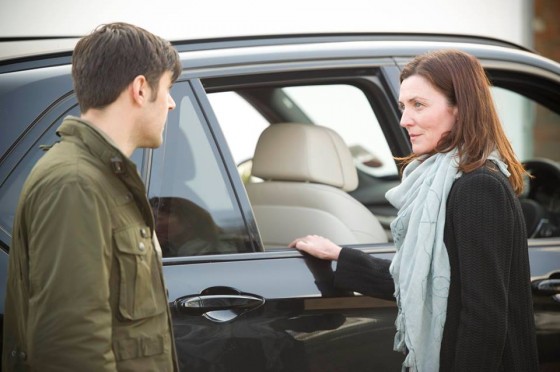 Jack finally comes face to face with Margot as he attempts to end the threat from the drones.

After the shocking finale to last week’s episode, this episode kicks off with the reveal that Chloe managed to get into Ian and Margot’s drone feed and loop the footage of Heller, so Heller is still alive and Margot was tricked into destroying an empty soccer field.  Ian catches the looping before they destroy all the drones and Margot immediately orders him to turn the remaining drone back toward London.

Chloe gets a general area for where Margot’s signal is coming from but has to call Adrian so he can use an illegal GPS program to triangulate the signal.  Jack has Belecheck bring Heller back to the embassy while he flies the chopper to Margot’s location and rendezvous with Kate and Eric to try and end things.  Kate manages to take out the buildings electrical system, so Chloe is able to pinpoint Margot’s exact location in the building.  A massive firefight ensues with Jack coming down from the roof and Kate and Eric coming up from ground level.  Jack pulls a Die Hard and ties an electrical cord around himself and rappels off the roof to the room Margot and Ian are in.  Ian tries to shoot Jack but misses and Jack reaches in and throws him out the window.  Jack gets in, wounds Margot and gains control of the drone, diverting a missile at the last second before it destroys the overloaded Waterloo underground station.  Margot hisses about all the deaths being on Jack and Heller’s hands but he says the only death on his hands is hers and throws her out the window as well.  Kate and Eric clean up the rest of Margot’s men and it seems like mission accomplished.

In classic 24 fashion though, a late game villain emerges, although we’ve known him the entire season: Adrian Cross.  Adrian tells Navarro to get a hold of the override device when Jack brings it back to CIA HQ because he wants it for some mysterious, nefarious purpose.  Kate and Eric, meanwhile, get a call that one of Kate’s contacts has found Jordan’s body and they go to find out what happened.  Kate sends the assassin’s prints to Jack, who uses an old CIA contact to figure out his identity and, more importantly, that Navarro was his old handler.  Jack tries to stop Navarro from escaping with the device but he manages to get away and is set to meet Adrian, whose also back in the good graces of Chloe.