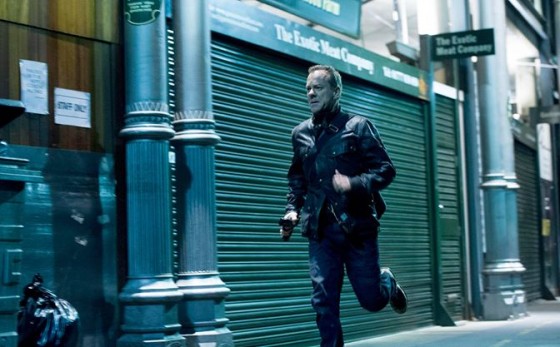 Jack’s old enemies complicate things as we head into the end game of Live Another Day.

After appraising everyone on Steve Navarro’s treason, Jack heads out in pursuit and, after a quick firefight, catches up to him at a subway station, but not before Navarro drops the override device to Adrian and Chloe, who escape.  Adrian tells Chloe he wants to reveal all the weaknesses of every country’s defense systems so that their weapons will be useless but Chloe doesn’t believe him and tries to escape with the override device, but Adrian stops her and they head to the new hideout of Open Cell, only to find everyone dead at the hands of Day 4, 5 and 6 baddie, Cheng Zhi.  If it’s been a while or you are new to 24, Cheng was put in charge of finding Jack during Season 4 when Jack led a covert strike against the Chinese embassy in LA, which caused the death of the consul, and Jack was captured by Cheng at the end of Season 5.  Cheng’s main evil scheme was during the incredibly forgettable season 6 has he tried to acquire Russian nuclear components but was eventually captured by CTU and transported to Chinese custody.  He’s apparently out and a free agent now and was the one who initially contracted Adrian to create the override device.

Back at the CIA, Eric is now in temporarily in charge and agrees to let Jack interrogate Navarro, if he doesn’t cross the line, which Jack, of course, does by pistol whipping the shit out of Navarro’s hand.  When Navarro is taken to the medical lab, Kate holds him at gunpoint, demanding information and yelling at him because her husband, who did not sell secrets to the Chinese after all, killed himself because of him.  Jack seemingly backs Kate down but it’s a ruse to get Navarro to talk, who will be getting executed for treason instead of immunity like he smugly thought he would get.   With a tracking code on the override, Jack and Kate head out with a tac team to recover it.

In the President’s camp, Heller is ready to head back to the US but decides to stay until the situation with the override is resolved.  Mark, feeling jealous about Audrey apparently still having feelings for Jack, escalates his deal with the Russians, who want Jack captured for his rampage against them in NYC, and gives them Jack’s comlink code, so they can track him.  On the way to Adrian’s hideout, Jack and Kate are ambushed by Russian agents and get trapped in a firefight.

Chloe is forced by Cheng back at Open Cell to restore the override to it’s original function of disabling the security of any defense system and Cheng then uses it to send a false fire order to a US nuclear sub, which launches torpedoes and destroys a Chinese aircraft carrier, which seems like something that could trigger World War III.