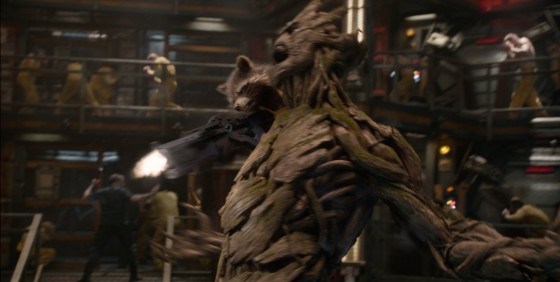 Guardians of the Galaxy continued to dominate this weekend with another $16.3 million and should pass over $300 million domestically before leaving theaters.  It officially became the highest grossing movie of the year last week.

TMNT stayed in second with another $11.8 million, putting it just over $162 million total.

If I Stay had a slightly less drastic drop than other teen girl dramas like The Fault in Our Stars or some of the Twilights, falling 41% from last weekend and taking third with $9.3 million and coming in just shy of $30 million for it’s two weeks out.

As Above, So Below was kind of a bomb, even though it probably only cost a few million to make.  It made $8.3 million, lower than Apollo 18 or Shark Night  3D’s openings at the same time a couple of years ago.  Audiences gave it a terrible exit ranking on Cinemascore of C-, so it will probably die as quickly as it’s young archaeologist team.

Let’s Be Cops rounded out the top 5 with another $8.2 million and it’s made over $57 million total.

The week’s other new release, The November Man, bombed as well, with a sixth place finish of $7.7 million, down from similar thrillers released in recent Labor Day weekends like The American, The Debt and Lawless.  Since it came out on Wednesday last week, it’s made $9.4 million total.

Sin City: A Dame to Kill For continues to implode as it only made another $2.2 million this weekend, putting it’s total take for two weeks at $10.8 million, which is less than the first movie made on it’s first day.

The 30th Anniversary re-release of Ghostbusters took in $1.65 million at 784 theaters this weekend.

Battle at the Box Office 9/8

August Movie Preview
as above so below Battle at the Box Office ghostbusters guardians of the galaxy if i stay let's be cops sin city: a dame to kill for the november man tmnt weekend box office