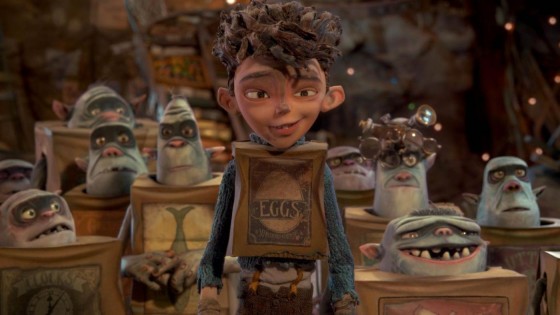 Since arriving on the scene with Coraline, Laika has been the undisputed masters of stop motion animation and their latest, The Boxtrolls, just ups the technical wizardry even more, even if the story is not quite as complicated as animation.

The Boxtrolls follows Eggs (voiced by Issac “Bran Stark” Hempstead-Wright) who is a human raised since a baby by the loveable underground dwelling Boxtrolls, most notably by his adopted father, Fish (Dee Bradley Baker).  The Boxtrolls just want to live in peace and tinker with the various little bits they borrow from the human world but an evil exterminator, Archibald Stalker (Ben Kingsley) is determined to eliminate them all in order to win a coveted “white hat”, which is the symbol of the town of Cheesebridge’s elite town council, headed by the cheese obsessed and completely oblivious Lord Portley-Rind (Jared Harris).  Eggs needs to journey to the human world and rescue his family from Stalker and gets help from Lord Portley-Rind’s spunky daughter, Winnie (Elle Fanning).  If you are fan of Wallace & Grommit, Boxtrolls will be right up your alley as it has the same dry British humor and wonderfully inventive machinery and contraptions.  The story is a little simplistic, especially compared to the previous Laika movies, Coraline and ParaNorman, but it does lend lots of spare time for wonderful little bits like the learning about Boxtroll culture or Snatcher’s henchmen pondering the nature of evil.  The climax feels like it goes on a bit too long as well, with a prolonged battle against Snatcher and his steampunk extermination mech.

The Boxtrolls are all wonderfully realized and each one has their own personality and are easily recognizable from each other.  While not quite as complex or nuanced as Dawn of the Planet of the Apes, there is the same level of non-verbal communication clarity (the Boxtrolls are kind of like ET or Gremlins and only speak one or two words at a time) and Laika ability to express facial features on the dolls is nothing short of incredible.  The smoothness of the animation is unbelievable and most people will probably walk away thinking it is another CG animated movie.  They also do an amazing job with the setting, as the town of Cheesebridge feels like a lived in place with various shops and landmarks and things like fog rolling in during the nights.  The Boxtrolls lair is equally as well realized, as you are able to piece together where every little trinket fits into their elaborate gadgets.    The voice acting is pretty great on all fronts as well, with Ben Kingsley almost unrecognizable as the slimy Snatcher and Jared Harris is great as the dim witted town official.  Elle Fanning’s character, Winnie, is a little annoying and reminded me a lot of Lucy from Peanuts.  There’s some great work on the side from voice actors Steve Blum and Dee Bradley Baker and also Simon Pegg, Nick Frost, Richard Ayoade and Tracy Morgan.

The Boxtrolls is an incredibly charming film that is amazing on the technical level but probably won’t blow anyone away with it’s story.  If you’re a fan of British humor and enjoyed Laika’s previous efforts, Boxtrolls is definitely worth checking out. (Be sure to stay through the credits for a delightful Eric Idle song and a fun gag/behind the scenes bit)