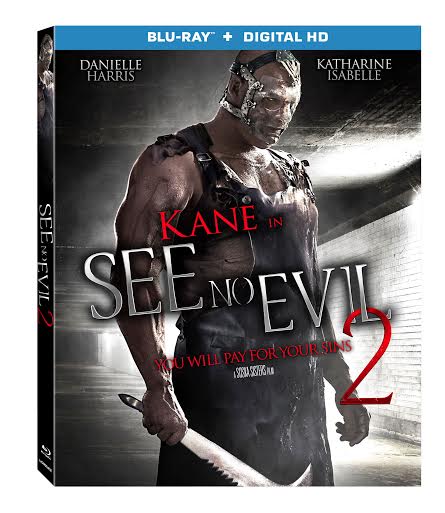 It’s been almost seven years since Kane’s Jacob Goodnight rampaged through an abandoned hotel in the first See No Evil but now he’s back and in the hands of the dementedly quirky Soska Sisters for See No Evil 2.

Taking cues from Halloween 2, See No Evil 2 picks up directly in the aftermath of the first film, as the bodies of Goodnight and his victims are brought to the local morgue.  With the influx of bodies, morgue worker Amy (Danielle Harris) decides to forgo her birthday celebration with friends but finds that they have come to the morgue to surprise her.  During the festivities, Amy’s kinky, serial killer obsessed friend Tamara (Soska regular/Hannibal co-star Katherine Isabelle) and her boyfriend mess around on and near Goodnight’s body, which awakens him and sets off another rampage.  The setup feels a little contrived and it takes a while for Kane to even appear on screen but once he does, it settles into a solid slasher film pace of kills and near misses.  The location of the morgue is not the most exciting  but the Soskas try to keep it fresh with lots of bizarre angles and strange lighting.  There’s a couple of great, creative kills, like Michael Eklund’s disabled morgue director getting a hook in his leg, but not being able to feel it and just getting dragged painlessly toward Goodnight.  Kane’s physicality is used to great effect as well, as there is literally not a door in the morgue that Goodnight does not smash through a la a demented Kool Aid Man.  It’s a little disappointing that his signature weapon from the first film, a meat hook on a chain, is only used once in See No Evil 2, replaced with a much more standard machete.  There seems to be a more concentrated effort to make Goodnight more “iconic” by giving him an NBA style clear face mask and a butcher’s apron but the movie loses two of the more interesting aspects of the character, his chain weapon, which offered lots of unique kills in the first film, and the abusive religious upbringing he experienced.  There are brief flashbacks in See No Evil 2 but Goodnight’s actions are lacking the warped morality of the first (even though sex is what brings him out of his death like state) and he just goes on what seems like a mindless rampage.   The Soskas have said they will explore more of Goodnight’s character and backstory if they get to do a third film but right now Goodnight is kind of a generic, albeit incredibly physical, slasher villain. (It should be noted though that the Soskas didn’t write the script)

The two main actresses are both great, with Katherine Isabelle getting to let loose with a crazy, drunken performance that is a-typical from pretty much everything else she has done, like the Soska’s American Mary or Hannibal.  Danielle Harris is solid “final girl”, which she honed in the Rob Zombie Halloween movies, but the Soskas throw a pretty big wrench into the Final Girl concept in the final act that is a nice switch up from other standard slashers.  Kane doesn’t really get much of a chance to act but he definitely delivers in the physical department, destroying entire rooms in his quest to take out victims and brutally overpowering everyone he catches.  Kaj-Erik Eriksen is also great as Seth, who almost feels like he’s a Joss Whedon character as Amy’s morgue co-worker who has a crush on her and has to try and save the day.  The rest of cast is pretty unremarkable but they are also pretty quickly dispatched by Goodnight, so you don’t have to deal with them for an extended amount of time.

If you were a fan of the first film, this is a solid sequel that features more Kane killing and some fun twists on the slasher genre but there aren’t enough to make it transcend the genre.