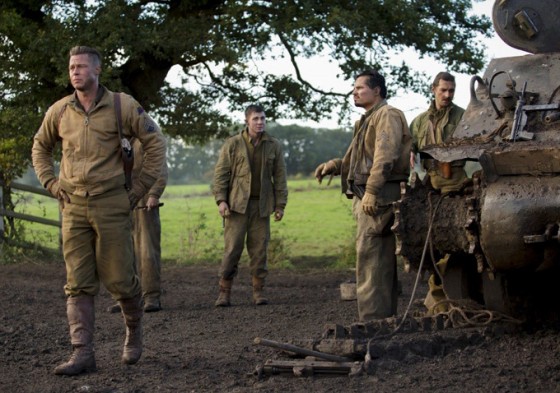 David Ayer did not exactly inspire confidence earlier this year when he placed our patron saint in possibly the worst movie of the year, Sabotage, but his profanity laced scripts and gritty violence work much better in Fury, a solid but not spectacular World War II movie.

Brad Pitt stars as Sgt. Don “Wardaddy” Collier, leader of the crew of the Sherman tank “Fury”, which includes Bible (Shia Labeouf), Coon-Ass (Jon Bernthal) and Gordo (Michael Pena).  When their front machine gunner is killed, they are saddled with incredibly green new recruit Pvt. Norman Ellison (Logan Lerman) as they try to survive the last few months of the war deep in German territory.  The movie does a great job of showing how much the war has ground down this crew and the typical David Ayer style ball breaking and shit talking you can tell is the only thing keeping these men from totally giving up.  Logan Lerman’s transition from a moral rookie who won’t kill to gunning down tons of Germans in the finale doesn’t feel as believable as similar storylines in other war stories, like Joe Mazzello’s tranformation in The Pacific.  The plot also doesn’t do anything new or original either, culminating in a pretty cliche, but still effective, last stand for the crew of Fury against seemingly insurmountable odds.

Unlike Arnold’s crew in Sabotage, the crew of Fury feels like they earn their slightly abrasive personalities, just because of the amount of horrors they’ve seen since the very start of the war in North Africa.  Brad Pitt plays a slightly more down to Earth version of Aldo Raine from Inglourious Basterds but you feel the respect the crew has for him and how he’s kept them alive.  Shia Labeouf is surprisingly great as the tank’s gunner and resident man of faith.  Jon Bernthal and Michael Pena are the two most antagonistic crew members to Logan Lerman but he eventually earns their respect and you understand that they are worried this rookie is going to get them all killed so close to the end of the war.

There are some phenomenal battle sequences in Fury, nowhere near the scale of Saving Private Ryan but still extremely tense and thrilling.  The battles give a great sense of how dangerous being a tank crew was, as while the Shermans had speed, they were woefully lacking in armor and firepower against the German panzers.  Probably the best sequence is when Fury and three other tanks have to face down a German T-88 and you quickly realize how outmatched the Americans are.  The movie also doesn’t romanticize the war at all, as the violence is horrific and everything is covered in blood and mud and you can see how tired and defeated everyone is after years of constant, brutal fighting.

Fury doesn’t reach the heights of other World War II media like Saving Private Ryan, Band of Brothers or The Pacific but it is a solid entry in the genre and one of the only movies I can think of that focuses on a tank crew, so it’s worth watching just for that.  If David Ayer can stay like this and not devolve into douchebaggery like Sabotage, I’ll be much more excited about his future projects.